All the Many Kinds of Musics, by Anne Nesbet

I've been thinking a lot about music recently--and also learning how to think a little less, as I music a little more. Here's how that goes:

When I was a kid, my life orbited elliptically around two centermost things: books and music. I loved belting out folk songs in made-up harmonies with my sisters in the back seat of the car. Then came actual real music lessons (on violin! and piano!), and I discovered that learning to practice with a metronome (a Heathkit metronome! which I built myself with my Dad!) made me feel serious and grown-up, and I spent hours working through pieces line by line or measure by measure, following super strict rules: three-times-in-a-row-perfectly to move the metronome speed up one notch. Any error moved you back a notch--no mercy. I discovered I really liked the discipline of this; it was (I see in retrospect) almost a kind of meditation: a practice practice.

BUT! Although I became a decently competent musician in some ways through my metronomic practice, there were gaps in my music life. I mean, enormous huge gigantic gaps, involving perhaps the heart of the whole "music" thing. Playing a page of Beethoven without missing any notes is nice, but what do you do if music starts happening around you, and there isn't a score, and you haven't had a chance to practice?

In college I made a friend who played the concertina--a wilder, more portable relative of an accordion--and she introduced me to contradance tunes, to jigs and reels and waltzes. My sister, who was and is a real violinist in every sense, played the fiddle part, and my job was the piano. But here's where things got interesting for my rigid, metronome-trained self: the job of the pianist in a string band is not to "play the music" as written, but to play everything NOT written!

What do I mean? Well, here's the music for a traditional old tune called "Over the Waterfall":

That's the melody line, and the fiddle and the concertina got to do what they wanted with it. My job was to get us into a good rhythm, figure out chords that sounded cool with the tune, and get a nifty bass line going--all on the fly. It was terribly hard at first--and then it became exhilarating. I was learning to let go, learning to improvise.

I still had much, much more to let go of, however. Let's switch instruments for this next part of the story: let's bring out the fiddle.

I have played viola or violin in orchestras most of my life, and I've learned to be pretty good at sight-reading and playing the notes and so on. Not bad. But what about, you know, playing other sorts of music? What about bluegrass and pop songs and and and?

My secret shame from childhood on has always been that I don't know the right songs. I have never known the right songs. "Popular music" was absent from my childhood: we had one album from the Beatles and one Grateful Dead record (almost by accident), and that was it. I have a bad memory for pop songs. But friends, I'm here to tell you that we shouldn't let bad memories and lack of knowledge hold us back! The music's playing--jump in, jump in, jump in!

In my case, my musically courageous and gifted friend Jayne invited me to come jam with some buddies of hers. We are the most motleyest of bands! Tuba, ukuleles (plural), guitar, toy piano, kazoo, voice, jar of dried beans, banjo, accordion, bass, and fiddle! Here's a photo from last night's practice (unfortunately missing the Tuba, who was out of town): 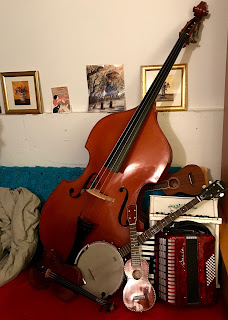 Now these people are all infinitely cooler than I am, and they know, seems like, every cool song ever written. There isn't sheet music at all for the songs we play, and guess what? IT DOESN'T MATTER. It turns out that if I let go properly of my hang-ups, I can noodle my way around any song, any kind of music. And there is nothing more wonderful.

My new book, coming out early in 2018, is called THE ORPHAN BAND OF SPRINGDALE, and it tells the story of a motley band--French horn, ukulele, and bean jar--inspired partly by my mother's hardscrabble but horn-playing Maine childhood and partly by all the wonderful people who have taught me and are still teaching me to let go of my sheet music and jump into tunes that are (as my characters might say) "as real as jam."

Needless to say, this isn't just about music. Writing, too, benefits both from our learning the rules and from learning to let go. "Over the Waterfall" with all of us, again and again and again!

p.s. The cover for THE ORPHAN BAND OF SPRINGDALE is going to be revealed this coming Monday (July 31st) on Betsy Bird's Fuse#8 blog (http://blogs.slj.com/afuse8production/), so give it a look! You'll see some lovely motleyness there, I do believe.
Posted by Anne Nesbet at 7/28/2017