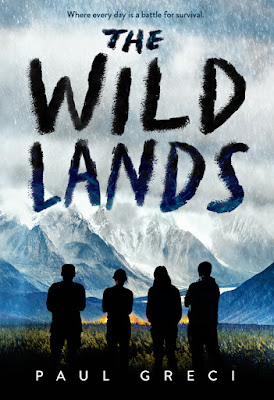 I know this is a blog about all things middle grade but I’ve got my first young adult novel coming out and am really excited to share the cover!! The Wild Lands hits the shelves on January 29, 2019 but you can pre-order it now.

Here’s the blurb from the cover:

When a collapsing U.S. government abandoned an Alaska ravaged by earthquakes and wildfires, Travis’s family chose not to evacuate. But now they realize their mistake—as food stores collapse and the few people who stayed turn on each other.

Travis and his younger sister Jess now must cross hundreds of miles in search of what remains of civilization. The wilderness they’re crossing is filled with ravenous animals, strangers competing for dwindling resources, and petty dictators fighting for control.

They’ll make a few friends and a lot of enemies on their terrifying journey across the ruins of today’s world. Travis and his fellow travelers will fight for what they believe in as they see how far people will go to survive.

This pulse-pounding thriller, full of shocking plot twists, is the ultimate survival tale of humanity’s fight against society’s collapse.

Thanks for stopping by. I hope to be sharing some information about the Sequel to Surviving Bear Island in the near future.

Paul Greci is the author of Surviving Bear Island, a 2015 Junior Library Guild Selection and a 2016 Scholastic Reading Club Selection. Forthcoming in October 2018 is Follow the River, a sequel to Surviving Bear Island published by Move Books. In January 2019, Paul's first young adult novel, The Wild Lands will be published by Macmillan.
Posted by Paul Greci at 4/23/2018