We are thrilled to announce a new team member, Kristen Zayon. Now we can truly say we've got you covered from A (Kell Andrews) to Z!!!

Without further ado, here's Kristen's bio in her own words. Her first post will be tomorrow.

Kristen Zayon took the long and winding road that led to writing and librarianship as a life choice. Raised in the tiny Alaskan town of Delta Junction, she received a degree in business (which she had no intention of really using) at the University of Alaska. Then she married this guy with a dazzling smile, and proceeded to have five kids. After emerging from the self-imposed haze caused by a decade of diapers and breastfeeding, she thought, “Hey, I should get a job.” Her children’s school seemed a logical choice, and she started out as a math and reading tutor. But as a self-described book nerd, she soon ended up in the library, where the librarian told her, “Girl, this is what you were meant to be.” Fast-forward several years and she was working as an elementary school librarian where she got to indulge her love of books and an affinity for children. She wrote her first book, “The Crystal Quest,” in sixth grade. It was published by her mom on a dot matrix printer. She has continued writing over the years, especially poems, because they are short and she doesn’t have much time. Recently though, she buckled down and wrote her first novel, which she is currently shopping to agents. She’s still married to that guy with the dazzling smile, and the kids are growing up much too fast for her liking. 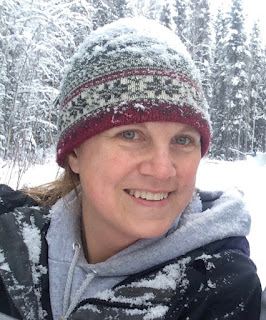 Leave a comment and welcome Kristen to Project Mayhem!
Posted by Michael G-G at 4/25/2018