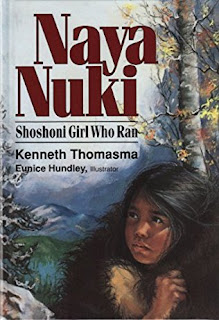 NayaNuki by Kenneth Thomasma came to me via an old friend in Hawaii who discovered it in a used bookstore, thought I would like it, and sent it to me. It is one of those books that sucks you in from page one and takes you on journey. I cracked the cover on a Sunday and by Tuesday morning was turning the last page as a very satisfied reader.

Naya Nuki was only eleven when she was taken captive by a rival Indian tribe. She and her best friend, Sacajawea, were forced to march 1000 miles from Montana to a North Dakota Indian village, where Naya Nuki became a slave.

Escape and reunion with her Shonshoni people was the only thing on Naya Nuki’s mind. She secretly began to prepare for her escape along the Missouri River. All during the long march east she had been watching for landmarks and hiding places.

Finally the opportunity to run away came. Naya Nuki traveled alone in the wilderness for more than a month. Her journey presents an amazing story of danger, courage, and survival skills.

I’d recommend it for girls and boys who are drawn to survival stories.

Naya Nuki was Kenneth Thomasma’s first novel. He has written and published nine additional novels, which you can learn more about here. He’s also the author of the nonfiction book The Truth about Sacajawea.

I feel fortunate that my friend sent me Naya Nuki. I can't wait to check out another Kenneth Thomasma book!

Paul Greci is the author of Surviving Bear Island, a 2015 Junior Library Guild Selection and a 2016 Scholastic Reading Club Selection. Forthcoming soon is Follow the River, a sequel to Surviving Bear Island to be published by Move Books. In January 2019, Paul's first young adult novel, The Wild Lands will be published by Macmillan. It is available for pre-order here.