I've been putting together a set of teaching materials (under the rubric of "History through Primary Sources") to accompany The Orphan Band of Springdale, which tells the story of 11-year-old Gusta Neubronner's arrival in the rural town of Springdale, Maine, in 1941, and so I find I've been thinking a lot about a topic that doesn't get an enormous amount of treatment in middle-grade books: fear.

"Wait!" you say. "There are lots of scary books out there! And--ahem--look at your cover, Nesbet--that does NOT look like a book about fear--" 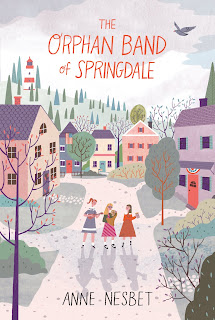 Well, right. I don't mean the kind of fear that makes a zombie story so delicious. I am interested in exploring the way "fear" wriggles into our brains and gets us to do sometimes hurtful things, as if fear itself were a rational reason.This sneaky, powerful kind of fear is very much at work today--and it was very much at work in 1941.

Here's the basic blurby version of what The Orphan Band of Springdale is about:

It’s 1941, and tensions are rising in the United States as the Second World War rages in Europe. Eleven-year-old Gusta’s life, like the world around her, is about to change. Her father, a foreign-born labor organizer, has had to flee the country, and Gusta has been sent to live in an orphanage run by her grandmother. Nearsighted, snaggletoothed Gusta arrives in Springdale, Maine, lugging her one precious possession: a beloved old French horn, her sole memento of her father. Gusta finds herself facing patriotism turned to prejudice, alien registration drives, and a family secret likely to turn the small town upside down.

In Springdale, Maine, in 1941, people are afraid of a great number of different things:

--having family secrets exposed;
--labor organizers and Communists;
--vision charts (and other tests they cannot pass);
--Germans and in general anyone with "foreign" names;
--aliens;
--cows.

The fear of cows doesn't necessarily cause a lot of harm (though it's embarrassing if your family runs a dairy), but some of these other fears can reshape our view of the world and affect the way we treat the people around us.

In 1940 the United States passed a law known as the "Smith Act" or the "Alien Registration Act." One of its provisions was that all non-citizens ("aliens"), no matter how long they had been living in the United States, had to go in to an official place (often the post office), fill in forms and be fingerprinted.

The local effects of this new law can be seen in the Sanford Tribune (the real-life newspaper covering the area of my fictional "Springdale"):

In my teaching materials about the Smith Act, I ask some questions about this article, and the way it must have affected the residents of Sanford-Springvale when they read it:

What word is used here to describe people who are not United States citizens? What effect does that word have, do you think?

If you came from a French-Canadian family and had been living in the Sanford area for a long time (generations, perhaps), but had not switched your official citizenship to "United States," what did the new law make you do?
What words in this article might worry you, if you were a non-citizen in 1941?

What would the effect of this article be on someone who WAS a citizen in 1941? What new thoughts about their non-citizen neighbors might the article make them have?

Notice how the words "person" or "people" do not appear once in this article. The people without U. S. citizenship--the same people who used to just be your neighbors on the next street--have been entirely transformed into "aliens."

In The Orphan Band of Springdale, the characters are afraid of all sorts of different kinds of things. At one point Molly Gowen, one of Gusta's classmates, argues that registering "aliens" is "just trying to be careful": 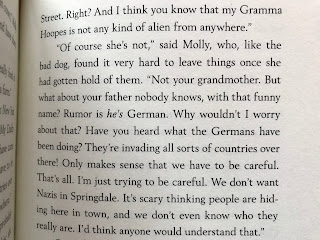 As the narrator comments, "Some conversations are like two people picking their way toward each other across a swamp." And fear is very hard to talk about. Some of Molly's fears seem pretty reasonable, right? But some of them have serious side-effects, like getting the Sheriff wondering whether Gusta or the German refugee oculist Mr. Bertmann belong in town at all.

Here's how Gusta responds to Molly:

"Even if my papa came here from Germany, haven't you ever thought for one minute that some people might leave Germany becausethey don't agree with what the Nazis are doing? Haven't you thought for a moment how dangerous it would be, to be someone who disagrees with what the Nazis think? If someone like my father put his foot into Germany, you know what they would do? They would lock him up! And then they would probably kill him."

Fear is a complicated feeling with complicated effects--which I guess means it is exactly the sort of thing middle-grade fiction should bravely explore. Fear can make us do hurtful things--but it can also make us cautious (which isn't always bad)--and it can even inspire us to be brave, despite our fear.  I realize now, thinking it over, that there are examples of all sorts of different reactions to fear (hurtful actions, cautious actions, brave actions) in The Orphan Band of Springdale. I didn't know this book about love and family and courage and music would turn out also to be a book about fear, but I'm glad it did.

Let's dig thoughtfully into ALL the tangled feelings and emotions and motivations in our books--in our reading and our writing!
Posted by Anne Nesbet at 6/07/2018

Email ThisBlogThis!Share to TwitterShare to FacebookShare to Pinterest
Labels: anne nesbet, The Orphan Band of Springdale