The Romance of Middle Grade Literature

Anyone who knows me well knows that I am a sucker for romance. Whether it’s movies or books, I’m all about that sweet moment when you see that spark of attraction between two characters, or when thwarted lovers finally embrace. This is probably why, when I have time to read just for fun, I usually choose young adult books, which almost always have a love story. Middle grade novels, on the other hand, are not thought of as being romantic, at least not in the sense that you might find in YA and adult books. And yet, if you look more closely, relationship romance is alive and well in the middle grade novel. It just looks and behaves differently. 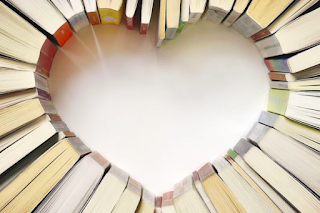 The question was raised to me this past school year, when a fifth-grade girl approached me looking for the romance books. I told her that in middle grade there isn’t really a romance category, but there are books that have a hint of romance in them. I was able to find a few for her off the top of my head – Wendelin Van Draanen’s Flipped, Shannon Hale’s Princess Academy, the classic Witch of Blackbird Pond – but my curiosity was piqued and I wanted to see what else I could find for her.
Digging a little deeper, I asked myself, what is it that sets a middle grade “love story” apart from the more traditional form we see in books for older readers? Not only is the physicality greatly reduced (mostly crushes, hand-holding and the occasional chaste kiss), but the build-up is different. Most middle grade romances are derived from friendships. We don’t see the instant, chemical attraction you might find in a YA book. Love in tween stories takes time to build up, often over the course of several books. Sometimes the affection grows naturally from a long-time friendship, such as that between Miri and Peder in Princess Academy. It’s only at the end of the book that they acknowledge the affection between them, and their relationship continues to develop, ever so slowly, through two subsequent books.

This is not uncommon in a middle grade series. Over the first book or two, the friendship is built and established, and it often isn’t until book three or more that the hinted-at romance comes to fruition. Numerous series come to mind – Anne of Green Gables, The City of Ember, Harry Potter, Gregor the Overlander, The Golden Compass, Magnus Chase and the Gods of Asgard. In all of these series, readers are patiently rewarded with love finally requited, albeit in an age appropriate manner. And to the authors’ credit, we don’t always get the perfectly happy ending that we might have hoped for.

Another device you might find is that the romantic element of the book involves not the main character(s), but side characters. For example, in Dianne Salerni’s 8th Day series, the love story involves the MC’s guardian. This sub-plot is engaging, and while it may not be essential, it adds interest and depth to the story. Also interesting to note is that Dianne originally wrote The 8th Day as a YA novel, but later revised it for middle grade, and for that reason, she actually had to tone down the romance significantly.
Love in the middle grade novel is hardly a new-fangled thing. In addition to the afore-mentioned Anne of Green Gables and Witch of Blackbird Pond, there are other, decades-old books that involve romantic relationships. In The Westing Game, Turtle has a crush on Doug Hoo through most of the book, while her future husband, Theo, is mesmerized by her sister, Angela. Calvin and Meg hold hands and awkwardly kiss in A Wrinkle in Time. If you’ve read the further books, (spoiler alert if you haven’t!) you know that they end up married with children. The Little House books eventually have Laura being courted by and married to a local farmer.
So, is romance appropriate in children’s books? I suppose some parents would tell you that unequivocally, NO, it's not. But if handled sensitively and carefully, romantic love, which is a natural part of life and something that older children especially are curious about, can be included in books for kids. What follows is a list of books that I came up with in my research. If you can think of others, or you want to share any of your favorites, please feel free to comment. Hope you “love” these books!