Middle grade writers spend a lot of time thinking and talking about what kids like to read, so I thought I would take the opportunity to ask some children themselves. I did a survey of 47 children in the 4th through 6th grades about what types of books they liked to read, and also about ebooks. Some of the results surprised me.
First, some facts about this group: The children attend a small private Montessori school, so there are only about 50 total students in the 4th-6th grades at this school. While these kids are a very small, privileged piece of the demographic pie, they are interesting, because they’ve had access to a variety of books their whole lives, and they have parents who have the funds and the resources to either take them to the library or buy them books, even hardcover new releases. They are aware of the choices of books out there. Not all of them like to read, as is typical with any group of students.  In fact, one boy who took the survey crossed out all the choices, I think as his way of indicating he really doesn’t like to read.

The survey they filled out did not ask for names, because I didn’t want them to feel they had to choose accepted or more popular types of books if they didn’t want to. It asked for their ages and whether they were a boy or a girl, and then asked them to choose their top three favorite types of books to read. I gave them the choices below and also told them examples of each category to make sure they understood. Not all of the children picked three; some picked more and some picked less.
Here were the choices:
Books set in imaginary places, fantasies
Science fiction, books set in the future or on different planets or spaceships
Mysteries
Books set in schools or in towns with kids like you
Books about animals
Books about adventures in faraway places or wilderness adventures
Books about sports
Books set back in time (historical)
Books set in today’s time, but with characters who have special powers or who are fantasy beings
Books with magic in them
Here are the results broken down by sex (I'll try to edit the post to get the choices more readable, but it's going to take me a bit of time to figure out how to do that): 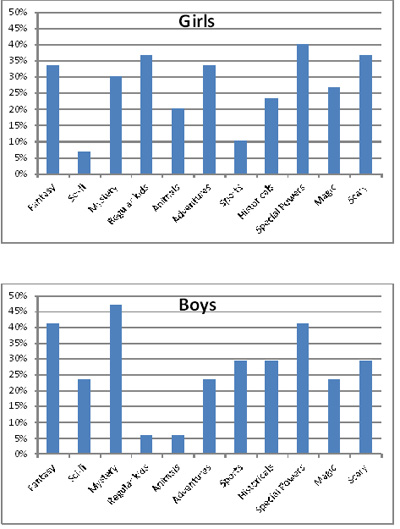 I was particularly surprised by the results of the boys. It was interesting to see mysteries as the top choice and historicals right up there with several other choices. I also wouldn’t have guessed that scary stories would score as highly with the girls.
There are also two factors about this group that might influence the results. One is that while many of these children participate in sports outside of school, there are no organized sports at school, and that may be why interest in books about sports is low.  Two, all the children know me and know my adventure books. My daughter pushed my first book, WILDFIRE RUN, to many of them, particularly the girls, so that may be why that category scored higher than it would in a school where one particular book wasn’t promoted so much.
The most fascinating part of the survey was about ebooks. I showed the children a Kindle and a Nook  and talked about the IPad to make sure they understood what an ereader was.  Silly me. I should have realized children this age are fascinated by technology and far more up-to-date than I am. When I asked how many had read a whole book on an ereader, twenty-seven said they had.  That’s 57%. Seven children even had ereaders of their own. This is at a school where very few children have cellphones, and where the parents of many of these kids don’t allow them to play video games or don’t encourage them to do so. I also asked of those who hadn't read a book on an ereader, how many thought they might want to try one. Thirteen of twenty said they would. That's kind of a trick question though. Most kids won't turn down a chance to try a new gadget.
I’m going to be talking to many more children in about a month from a different sort of school and will ask them to fill out the same survey. More results to follow!
~ Dee Garretson
Posted by Project Mayhem at 10/17/2011