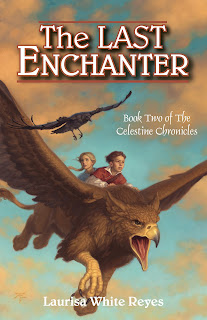 
One year and ten days ago--right here on Project Mayhem--I posted a review and giveaway HERE of The Rock of Ivanore, book one of the Celestine Chronicles series. Today, I am excited to share the cover reveal of book two: The Last Enchanter.
The Last Enchanter is scheduled to be released October 15th, 2013. The paperback version of The Rock of Ivanore will also be released that day.

I can't wait to see where this truly EPIC story will take us this time!

Months have passed since Marcus and Kelvin succeeded in their quest to find the Rock of Ivanore. Kelvin is living as royalty in Dokur, and Marcus is studying magic with Zyll. When Fredric is murdered and Kelvin becomes king, Zyll and Marcus head for Dokur in hopes of protecting Kelvin from meeting the same fate, though it quickly becomes apparent that none of them are safe, and Marcus has had disturbing visions of Zyll's death. With the help of his old friends Clovis and Bryn, joined by new friend Lael--a feisty girl in search of her mother--Marcus uncovers a powerful secret that will change the course of his life forever.

Lord Fredric, ruler of Dokur, stared out his window toward the sea. The sounds of the cutting and hammering of wood, and of men shouting came to him on a crisp salty breeze. Below in the bay, Dokur’s navy was busy rebuilding their ships. Eight months earlier Fredric’s own son had led the Hestorians to these very shores, and Dokur had nearly fallen by their swords. But soon these ships would set sail for the mainland and take revenge on them.


Fredric heard the door behind him open. The gentle clinking of crystal against silver was the only introduction the visitor needed.


“Is it time already?” Fredric asked without turning. “I would like a little wine to soothe my nerves before bed.”


Arnot filled a goblet and handed it to his Lord with a slight bow. Fredric downed the contents, and then returned the empty goblet.


“I fear I have grown too old for battle,” said Fredric, crossing the room to his bed. “These eyes have witnessed too much bloodshed, too much suffering.”


He held out his arms while the sable-skinned attendant removed his royal robe and replaced it with a linen nightshirt. Once Fredric was dressed, Arnot went to the bed and pulled back the covers. “Your bed is prepared, my Lord.”


Fredric rested his hands on the edge of the mattress. “My stomach,” he said. “It bothers me so.”


Fredric rubbed his stomach and then raised his hand to his forehead where beads of sweat had formed.


“I am not well tonight,” he continued, sighing. “But such is to be expected at my age.”


Suddenly, Fredric clenched his teeth together and his hands balled into fists against the mattress. He groaned as his entire body began to shake. Fredric grabbed the quilt in both fists and pulled with such force that the fabric tore. A moment later he dropped to his knees, gasping for air.


Arnot remained where he stood with his back to the colorful tapestry that hung ceiling to floor against the wall. He stared at Fredric with cold eyes.


“Arnot,” called Fredric, reaching for the attendant with both hands. “Please help me!”


A faint smile appeared on Arnot’s lips—so faint that Fredric wondered if his eyes were playing tricks on him. When the attendant finally crossed the room to the door, Fredric felt relieved that help would be found. He lay down on the floor, too weak now to lift himself into the bed.


“Tell my doctor to hurry,” he whispered. “Tell him I am very ill.”


Arnot looked back at Fredric. The smile on his lips was now unmistakable, and there was a look of pleasure in his face.


“You are not ill,” he said coolly. “You have been poisoned.”


Then Arnot slipped through the door and shut it quietly and securely behind him.