E.L. Konigsburg - Reading Beyond FROM THE MIXED UP FILES OF MRS. BASIL E. FRANKWEILER 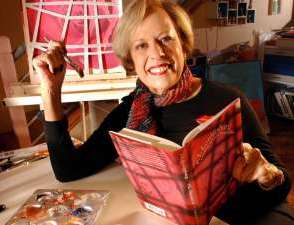 FROM THE MIXED UP FILES OF MRS. BASIL E. FRANKWEILER is one of the classics of modern children’s literature. When I heard that author E.L Konigsburg passed away, I remembered how very much I loved The Mixed Up Files book as a child. I still think it would be amazing it would be to spend days in a museum with no one else around, and if I had a mystery to solve, all the better. Thinking about this book made me realize I’d never read anything else she wrote, and that led me on a reading journey.
First, some interesting facts about Ms. Konigsburg. The “E. L”. stood for Elaine Lobl. She had a degree in chemistry. (I’m married to a chemist, so I found this very interesting. The last thing my husband would ever do is write fiction.)  She was also the only person to both win the Newbury and be a runner up in the same year. In 1968, The FROM THE MIXED UP FILES book was the winner, and her other book, JENNIFER, HECATE, MACBETH, WILLIAM MCKINLEY, AND ME, ELIZABETH, was awarded a Newbury Honor. A side note-I doubt if that title would fly today!
While I was reading some of her other books, I realized something that marks them as different from much of middle grade fiction today. Many of them are written with more than one point of view, and those points of view include adults. These days, it’s hard to convince some people that kids will read books with adult POVs included.
She wrote more than a dozen books, and below are two I enjoyed. 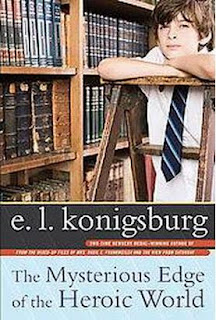 THE MYSTERIOUS EDGE OF THE HEROIC WORLD
From the publisher’s description: “Amedeo Kaplan has a secret, a dream: More than anything in the world, he wants to discover something-a place, a process, even a fossil-some treasure that no one realizes is there until he finds it. And he would also like to discover a true friend to share these things with.
William Wilcox seems like an unlikely candidate for friendship: an aloof boy who is all edges and who owns silence the way other people own words:. When Amedeo and William find themselves working together on a house sale for Amedeo’s eccentric neighbor, Mrs. Zender, Amedeo has an inkling that both his wishes may come true. For Mrs. Zender’s mansion is crammed with memorabilia of her long life, and there is a story to go with every piece. Soon the boys find themselves caught up in a particular story…and a painful secret dating back to the outrages of Nazi Germany. It’s a story that will take them to the edge of what they know about heroism and the mystery of the human heart.” 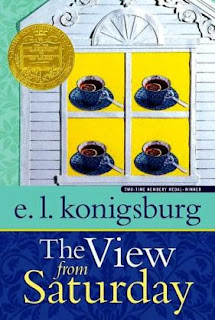 THE VIEW FROM SATURDAY (a Newbury winner in 1997)
From the publisher’s description: “How had Mrs. Olinski chosen her sixth-grade Academic Bowl team? She had a number of answers. But were any of them true? How had she really chosen Noah and Nadia and Ethan and Julian? And why did they make such a good team?

It was a surprise to a lot of people when Mrs. Olinski's team won the sixth-grade Academic Bowl contest at Epiphany Middle School. It was an even bigger surprise when they beat the seventh grade and the eighth grade, too. And when they went on to even greater victories, everyone began to ask: How did it happen?
It happened at least partly because Noah had been the best man (quite by accident) at the wedding of Ethan's grandmother and Nadia's grandfather. It happened because Nadia discovered that she could not let a lot of baby turtles die. It happened when Ethan could not let Julian face disaster alone. And it happened because Julian valued something important in himself and saw in the other three something he also valued.

Mrs. Olinski, returning to teaching after having been injured in an automobile accident, found that her Academic Bowl team became her answer to finding confidence and success. What she did not know, at least at first, was that her team knew more than she did the answer to why they had been chosen.”

These books wouldn't be the easiest to read for struggling readers, but I can see them appealing to kids who like quirkiness, along the lines of THE MYSTERIOUS BENEDICT SOCIETY, and who can keep track of the multiple POVs. As for me, I’m happy to have more of Ms. Konigsburg’s books to discover.