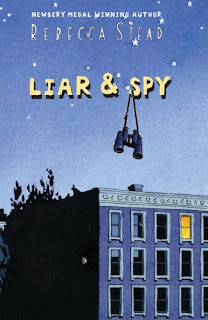 Liar & Spy is the first Rebecca Stead (Newbery Medal Winner for When You Reach Me) book I’ve read. The title caught my eye, but the romp-in-the-park, spot-on middle grade voice kept me turning page after page to see what would become of the narrator Georges (the S is silent), and these other characters with cool names: Safer, Bob English Who Draws, Pigeon, Candy and Mr. X.

Speaking of voice, here’s the opening paragraph: There’s this totally false map of the human tongue. It’s supposed to show where we taste different things, like salty on the side of the tongue, sweet on the front, bitter in the back. Some guy drew it a hundred years ago, and people have been forcing kids to memorize it ever since.

Here’s some abbreviated cover copy without any spoilers: Seventh grader Georges moves into a Brooklyn apartment building and meets Safer, a twelve-year-old self-appointed spy. Georges becomes Safer's first spy recruit. His assignment? Tracking the mysterious Mr. X, who lives in the apartment upstairs. But as Safer becomes more demanding, Georges starts to wonder: what is a lie, and what is a game? How far is too far to go for your only friend?

I read the first few pages of Liar & Spy to my fifth grade class when we were studying the five senses. They loved it! If I could work it in I’d read them the whole book because it has that captivating read aloud quality that some books have.

I’m giving away one hardcover copy of Liar and Spy. Just leave a comment anytime between now and midnight Thursday Eastern Time to be considered.