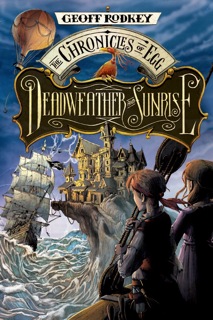 On Wednesday, I had the pleasure of posting an interview with author Geoff Rodkey, but the true pleasure was reading his book DEADWEATHER AND SUNRISE (the first book in the CHRONICLES OF EGG series). The second book, NEW LANDS came out today, and although I haven’t read it yet, I do have a copy for future reading (trust me, I’ll be reading soon).

There are many things to love about DEADWEATHER AND SUNRISE, but one of my favorite features was Rodkey’s ability to incorporate pirate jargon and mannerisms without making them stand out. The dialogue between the pirate characters comes off naturally without feeling overdone. Having read quite a few pirate books, I know this is not easily done. More than a few pirate books overuse pirate lingo and phonetic spellings too much, but not Rodkey’s tale. It grounded the reader from the outset in the world Rodkey has created, and made the journey that much more enjoyable.

Although I’ve already referred to the book as a “pirate book” I feel it necessary to explain that this isn’t merely a pirate tale, but a true adventure of a fantastic voyage. If there isn’t yet a middle-grade mix of an adventure-fantasy-mystery-thriller genre, this book should be the archetype. The pace is fast enough to capture the typical middle-grade reader, but not too breakneck to omit the substance of the story or the definition of the characters. We hear all the time with adventure books that the characters are too often sacrificed for the sake of the plot, but that's not the case here.

Speaking of the characters, Egbert (Egg) is a truly authentic main character that we root for at every turn. His brother Adonis and his sister Venus (love the names) are rough around the edges and aren’t exactly loving siblings, but this makes us root for Egg all the more. While some might argue that the siblings aren’t quite “likeable” and this hurts the story, I argue that the siblings are used to push readers toward Egg even more. The same can be said of Egg’s desire to learn, and his horrible teacher Percy, who we hate as readers. Writers understand the use of foils and dastardly characters of this mold, and Rodkey uses his characters with purpose. Not every person in real life is likeable, and so too is the world of fiction. As a writer, it's using these unlikeable characters that's the trick. It is well done in this book.

I highly recommend DEADWEATHER AND SUNRISE, and I am eager to read the second book in the series, NEW LANDS. Remember, it came out today (5/1), so now you can get a copy too! Here's the fantastic cover, and a bit about it: 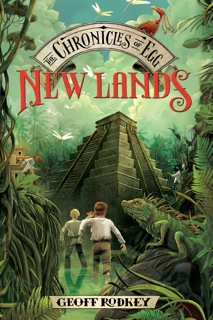 After a narrow escape from Deadweather Island, Egg and his slightly deranged partner Guts head for the remote New Lands. They’re in search of the lost Okalu tribe, who hold the key to the mysterious treasure map that Egg can't decipher. But the ruthless Roger Pembroke is hard on Egg's trail, and the New Lands are full of new enemies—against which our heroes' only weapons are their brains, their courage...and the two dozen swear words Guts just memorized in the local tongue.

They're going to need help. But who can they trust? Is Kira, the beautiful and heavily armed Okalu refugee, their ally…or their enemy? Is Pembroke's daughter Millicent on Egg's side…or her father's? Why on earth is the notorious pirate Burn Healy being so nice to them? And the biggest question of all: what shocking secret is Egg about to discover in the shadow of an ancient Okalu temple?
Posted by Mike Winchell at 5/02/2013