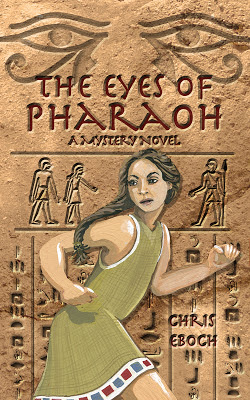 A teacher friend of mine used my middle grade mystery, The Eyes of Pharaoh, with her gifted students. Before the kids started the book, she asked them to look at the cover (art by Lois Bradley) and describe what they thought the book was about. (Here's your chance to make your own guess.)

And here are some of their answers (with the spelling cleaned up):

How close were they? Here’s the long version of the book synopsis:

The Eyes of Pharaoh, 1177 BC: During the reign of Pharaoh Ramses the Third, Seshta, a 13-year-old dancer in the Temple of Hathor, dreams of becoming a famous entertainer. Horus, the brother of her heart, is content as a toymaker’s apprentice. Reya, at 16, has joined Egypt’s army with hopes of becoming a hero. Despite their different paths, nothing can break the bonds of their friendship.

When Reya hints that Egypt is in danger from foreign nomads, Seshta and Horus don’t take him seriously. How could anyone challenge Egypt?

Then Reya disappears. Seshta and Horus set out to find him—and discover a darker plot than they ever imagined. To save their friend, Seshta and Horus spy on merchants, soldiers, and royalty, and start to suspect even The Eyes of Pharaoh, the powerful head of the secret police. Will Seshta and Horus escape the traps set for them, rescue Reya, and stop the plot against Egypt in time?

Set in ancient Egypt, the ideas in this book echo in the international politics of today, while the power of friendship will touch hearts both young and old. Suitable for ages 9 and up.

Do you think the kids got a good enough impression of the book from the cover? Many of them did pick up on some aspects of the story – a female main character, mystery, and of course ancient Egypt, although some kids thought the book would be set there, while others thought it involved a modern girl traveling back in time or investigating ancient tomb. This is probably more accurate than what I could get from a lot of book covers. And I guess the most important question is not, “Does the cover accurately portray what’s inside the book?” but rather, “Does it make a potential reader want to read the book?”

How much do you judge a book by its cover? Is it more important to capture aspects of the plot, or the overall tone?

Read the opening chapter of The Eyes of Pharaoh at Chris's website or download a sample from the book’s Amazon page.

Chris is also the author of The Well of Sacrifice, an adventure in ninth-century Mayan Guatemala.
Posted by Kris Bock at 9/06/2013