Today I would like to celebrate the world's greatest children's author (note: this is my personal opinion, and is not meant to disparage Judy Blume, who is obviously amazing, but did not much appeal to me as a boy, because her books were for girls, ew).

Roald Dahl is perhaps the most well known author of middle grade titles in the world. Or at least he was before there was such a thing as middle grade and young adult, and books were either children's books or something else. I don't say this to take anything away from any other authors, and I'm sure my love for his books is influenced by the fact that I was born at the height of his success, but even if you don't consider him the best EVAH, surely you have enjoyed at least one of his tales (and if not, you might want to get on that, like STAT).

Anyway, regardless of where he ranks on the Matthew-MacNish-greatest-children's-authors-in-history-scaleTM, today I would like to share with you my top five favorite Roald Dahl novels, in order, from nearly favorite to very favorite!


Charlie and the Chocolate Factory

Such a wonderful, magical book. From Willy Wonka to the Oompa Loompas, to the eponymous chocolate factory, there is so much imagination in this book. I love it with all my heart. However, while I'm well aware that many people might list this as their favorite Dahl novel, for me it is only my nearly-favorite. Only because there are so many other wonderful ones! Like:

As an adult with the humor bone of a twelve-year-old boy, I can never help but think of the title of this book standing for something very silly. However, while this book is full of fun and silliness, it's actually quite adorable. It also doesn't hurt that it is actually an expansion of a part of my very favorite Dahl book, shown below. Oh Matilda, you precocious little genius you! Matilda is probably my favorite Dahl protagonist. The ways in which she stands up to her situation are so adorable, but also so inspiring. I mean it's all fantasy, of course, but it's also so real. This book also gets a bonus for having one of the best two movie adaptations of a Dahl book (see the next entry for the other one).


James and the Giant Peach 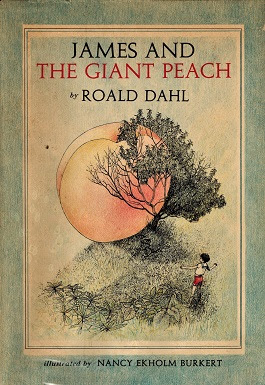 Other than Gremlins, this is Roald Dahl's first book. It's a story about a small boy who escapes his cruel aunts inside a giant peach filled with giant insects (it's not that simple, obviously, but we're in a hurry here) and then sails it across the Atlantic, by luring a flock of seagulls into towing it. I mean, it all makes perfect sense, right? As wild and ridiculous as it sounds, this is one of the greatest children's stories ever written, and it also has a most excellent film adaptation.


Danny, the Champion of the World