The Elusive Hunt for Character Awesomeness! 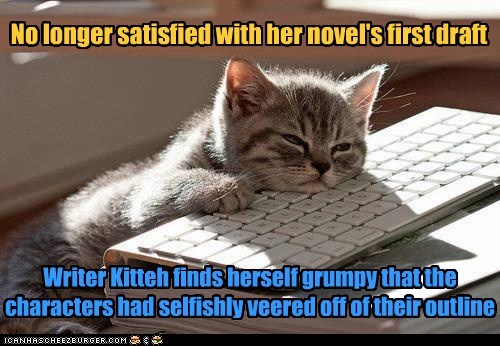 This past Saturday I was lucky enough to present to the Downstate IL SCBWI. We talked about characterization and how to make our characters leap from the page. Below are a few key points we touched on, but let's hear from you. Help add to our discussion. How do you create your characters? Where do you start? How do you make them worth reading?

What are your character's scars?
Love it or loathe it, we all have a past and that past has taught us to respond to the world around us. If your character was ignored or treated badly when they were little, that’s going to affect her as a teenager: she might search for comfort with a bad crowd, she might dread turning off the lights, because a man broke into her parents' home when she was little and she's never gotten over it. Scars like that makes your characters human. We all have something that happened to us that still bothers us, or we wish we could erase. It's what makes a real.

So...devil's advocate her, let's say your character has no scars, maybe they had it too good. They grew up in a good upstanding family. They were comfortable and happy. Their parents weren't pushy or domineering, they literally grew up in that all American cookie cutter family, that in most cases really doesn't exist, but let's say for the sake of your story, it does. So use that to your advantage. Maybe that lack of pain in their history, makes they easily susceptible to bad people or bad things, they're too trusting, too easily swayed, or maybe their parents were so nice, they spoiled them and they don't understand someone else's pain because they never lived it. They never had that angst that most people have, so how can they relate? That, in and of itself, is their scar.

Give your character a driving force
What fixates your character? We need them to care about something bigger than themselves. That said, turn your character's passion into an obsession. When a character is obsessed with something or someone, it drives urgency, conflict, in other words, your story. Obsessions also show us a lot about the person.

Keep in mind, the obsession can be a number of things. They can be obsessed with another person. Someone they love. Someone they hate. Someone they don't even know. They can be obsessed with winning something, like the championship game or even something as simple as the gold medal for baking at the state fair. Stories with that angle can be funny too. Think about, sixteen-year-olds Francine and Betty fighting it out cage-match style in a livestock pen over who had the best Dutch apple? Your characters can also be obsessed with a concept. You know, like the alien movie where everyone who's "been called" paints that darn mountain in their mashed potatoes and goes to find the spaceship? (Insert Close Encounters music here.)

Don't bore with backstory
You create your characters for the sake of the story…but your readers need to feel they've been around a lot longer than the time it takes to read your book.

Backstory is an excellent tool for building characters, but don't make the mistake of giving too much. If you spend too much time creating a character's history it will be at the cost of your actual story. You'll end up bogging your readers down with too much detail. Your readers are smart, so let them be. They will fill in the blanks on their own and in so many ways that's better because not only are they seeing your world, but the parts you leave out will be created in the minds of your readers, making that world somewhere they really want to be. You can have steadfast parts of your world that the reader can't change, but for the rest, the reader may only need hints, suggestions, to know the rest of the world exists. Once the reader is embedded in the world both you and they created, they'll be in it for the long haul.

So, give us your tips on great characters. Who are your favorite characters in children's lit? Give us some advice on how to make our characters great, while avoiding the pitfalls!

Thanks so much to Anastasia, Linda, Sherry, and John, the SCBWI network reps, for making our day so great and productive!
Posted by Hilary Wagner at 9/17/2013