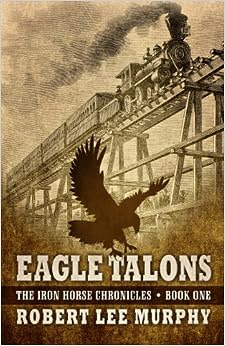 Eagle Talons, Book One of the Iron Horse Chronicles by Robert Lee Murphy is a fast paced story with well-developed characters set in 1867 on the frontier as the railroad is expanding westward.

Will Braddock doesn’t want some old judge dictating his future. The newly orphaned fourteen-year-old embarks upon a quest to determine his own destiny. He heads west to find his uncle, a surveyor on the first transcontinental railroad. He has to convince his only living relative not to sign the judge’s papers sentencing him to a blacksmith apprenticeship. He wants to be free to ride across the windswept prairies and through the forested mountains, not pound nails in a barn. He wants to be part of the excitement of building the Union Pacific Railroad.

This is a coming of age story set in a time where kids on their own had to grow up fast. Murphy does a great job of using the both the historical setting and the landscape as vehicles to increase the tension and keep the story moving.

Without any spoilers, I loved the tricky situations Will had to navigate, the characters he had to confront, and the barriers he had to overcome to survive. There is much in this book to discuss, from what it was like to be a boy relying on himself in a dangerous place and time, to how the Native Americans were affected by the coming of the railroad.

Eagle Talons published by Five Star Publishing, an imprint of Gale is scheduled to be available in libraries, on-line, and in bookstores on October 22, 2014. Until then, you can read the sample chapters on the author's website.
Posted by Paul Greci at 9/16/2014