On Leaping Into New Things 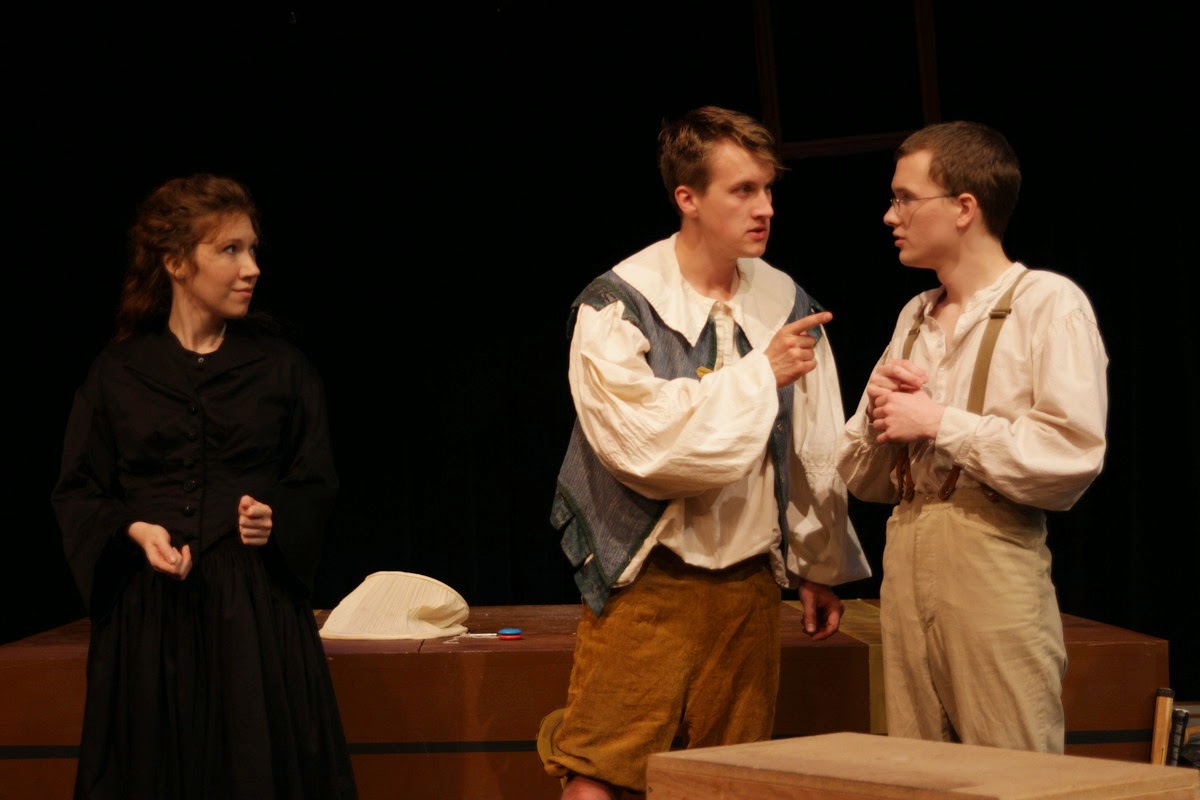 A number of years ago, I wrote a play called LEAP, and the photo above is from the Seattle production at Live Girls Theater. The characters are Virginia Woolf, William Shakespeare, and Samuel Clemens as children, preparing to take a giant creative leap into something terrifying and thrilling and necessary. I think my choice of those three writers in particular was fairly subconscious, but in retrospect, I love that I selected a writer of humorous fiction, a writer of subversive feminism, and a writer of plays, pulling the strands of the writer I hoped to be into one moment in time.

I spent many more years as a playwright than I've spent writing fiction. Aside from a few stories when I was in elementary school, fiction was never my thing. Oh, I loved reading it. But as a writer? I was a playwright, through and through. I created characters and wrote dialogue. I loved the collaboration with actors and directors and designers. I would never write fiction.

Except I did. I sort of fell into it, through a ghostwriting job I was really unqualified for but found I enjoyed, and then I got hired again, and again, and I realized I wasn’t actually awful at the fiction thing. It was a different process from playwriting, for sure. And some of my playwriting habits bled through – I do very little in the way of visual description of people or places, for example. But I found my way and have been writing middle grade fiction for four years.

But I would only write middle grade fiction. As much as I love reading YA, I would never write YA. (Not least because I seriously do not want to relive my teenage years.)

Except – and don’t tell my fellow Mayhemites, lest they disown me – I’ve written a YA novel. Some of my middle grade habits may have bled through – despite the darkly subversive feminism in it, there’s a healthy bit of hope too, which I think will always be important in my writing, no matter what genres or forms or age levels I write.

As I get older – and being a parent plays a huge role in this – I become much less rigid in my thinking. I used to say never a lot. I’ll never write fiction. I’ll never homeschool. I’ll never write YA. I’ll never be one of those parents who [WHATEVER I JUDGED BEFORE I HAD KIDS]. Things happen. People change. Writers evolve.

So if I were a less evolved person, these are the things I’d be tempted to say I will never write: poetry, sci-fi, adult literary, memoir. So around 2025, you can probably keep your eyes open for my literary memoir-in-verse, TO THE MOON AND BACK.

What are the things you think you’ll never write? What have you surprised yourself by writing? Is there something you've been holding back from writing because you think, for some reason, that you can't? What would happen if you took the leap?