I remember September 2001 well. I spent most of it counting down the days to my wedding, and the morning of the 11th I was working my first post-college job as a receptionist for an orthopedic surgeon - until all work stopped, and the medical staff hovered around the waiting room TV monitors sharing the breath-stealing moments as tragedy unfolded. I remember the chaplain leading us all in an impromptu prayer gathering in the hospital garden and the following weeks full of heart-rending stories of heroics and loss and terror and the searing images of a national crisis. Though I was living near Chicago at the time and distant from the events, my own daily life changed with the shifting economy, the panicked travel warnings, the rumors of war, and the sense that nothing would ever be the same again.

If you're old enough, you have your own unforgettable memory - that moment of discovery when you first heard the news or saw the cloud above the NYC skyline. But as I prepared today's post, I realized that for many of our middle-grade readers 9/11 is a chapter in a textbook, a narrative they know secondhand. It's like when my own teachers recounted where they were when JFK was assassinated, and I sat and took notes on my lift-top desk and relegated their anecdote to the files of my pre-history.

So today I thought to gather together some novels having to do with 9/11 written for young readers. Of course there are plenty of outstanding non-fiction accounts that tell the events themselves in age-appropriate ways, but I'd like to spotlight fictional narratives that give glimpses into how 9/11 shaped our individual stories. I haven't read any of these, a fact soon to be remedied, but I'm grateful for the authors who have chosen to tackle such a difficult topic for young people.

ASK ME NO QUESTIONS, by: Marina Budhos & Ferdinando Scianna


Nadira and her family are illegal aliens, fleeing to the Canadian border -- running from the country they thought was their home. For years since emigrating from Bangladesh, they have lived on expired visas in New York City, hoping they could someday realize their dream of becoming legal citizens of the United States. But after 9/11, everything changes. Suddenly, being Muslim means being dangerous, a suspected terrorist. And when Nadira's father is arrested and detained at the border, Nadira and her older sister, Aisha, are sent back to Queens and told to carry on, as if everything is the same.

But of course nothing is the same. Nadira and Aisha live in fear they'll have to return to a Bangladesh they hardly know. Aisha, always the responsible one, falls apart. It's up to Nadira to find a way to bring her family back together again.

Critically acclaimed author Marina Budhos has given us a searing portrait of contemporary America in the days of terrorism, orange alerts, and the Patriot Act, and a moving and important story about something most people take for granted -- citizenship and acceptance in their country. (Goodreads) 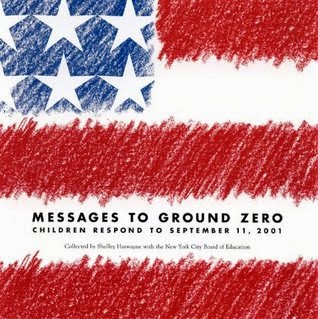 
A collection of letters, poetry, and art by children in response to September 11th. All were sent to other children reflecting inocent support, outreach, and caring. This book is an archive of what children were thinking and feeling through their honest and heartful messages. (Goodreads)


I want to see what is on the other side of the dust When the towers fall, New York City is blanketed by dust. On the Lower East Side, Yolanda, the Cinnamon Girl, makes her manda, her promise, to gather as much of it as she can. Maybe returning the dust to Ground Zero can comfort all the voices. Maybe it can help Uncle DJ open his eyes again. As tragedies from her past mix in the air of an unthinkable present, Yolanda searches for hope. Maybe it's buried somewhere in the silvery dust of Alphabet City. (Goodreads)

LOVE IS THE HIGHER LAW, by: David Levithan


The lives of three teens—Claire, Jasper, and Peter—are altered forever on September 11, 2001. Claire, a high school junior, has to get to her younger brother in his classroom. Jasper, a college sophomore from Brooklyn, wakes to his parents’ frantic calls from Korea, wondering if he’s okay. Peter, a classmate of Claire’s, has to make his way back to school as everything happens around him.

Here are three teens whose intertwining lives are reshaped by this catastrophic event. As each gets to know the other, their moments become wound around each other’s in a way that leads to new understandings, new friendships, and new levels of awareness for the world around them and the people close by. David Levithan has written a novel of loss and grief, but also one of hope and redemption as his characters slowly learn to move forward in their lives, despite being changed forever. (Goodreads)

THE USUAL RULES, by: Joyce Maynard


It's a Tuesday morning in Brooklyn—a perfect September day. Wendy is heading to school, eager to make plans with her best friend, worried about how she looks, mad at her mother for not letting her visit her father in California, impatient with her little brother and with the almost too-loving concern of her jazz musician stepfather. She's out the door to catch the bus. An hour later comes the news: A plane has crashed into the World Trade Center—her mother's office building.

Through the eyes of thirteen-year-old Wendy, we gain entrance to the world rarely shown by those who documented the events of that one terrible day: a family's slow and terrible realization that Wendy's mother has died, and their struggle to go on with their lives in the face of such a crushing loss.

Absent for years, Wendy's real father shows up without warning. He takes her back with him to California, where she re-invents her life: Wendy now lives more or less on her own in a one-room apartment with a TV set and not much else. Wendy's new circle now includes her father's cactus-grower girlfriend, newly reconnected with the son she gave up for adoption twenty years before; a sad and tender bookstore owner who introduces her to the voice of Anne Frank and to his autistic son; and a homeless skateboarder, on a mission to find his long-lost brother.

Over the winter and spring that follow, Wendy moves between the alternately painful and reassuring memories of her mother and the revelations that come with growing to know her real father for the first time. Pulled between her old life in Brooklyn and a new one 3,000 miles away, our heroine is faced with a world where the usual rules no longer apply but eventually discovers a strength and capacity for compassion and survival that she never knew she possessed.

At the core of the story is Wendy's deep connection with her little brother, back in New York, who is grieving the loss of their mother without her. This is a story about the ties of siblings, about children who lose their parents, parents who lose their children, and the unexpected ways they sometimes find one another again. Set against the backdrop of global and personal tragedy, and written in a style alternately wry and heartbreaking,The Usual Rules is an unexpectedly hopeful story of healing and forgiveness that will offer readers, young and old alike, a picture of how, out of the rubble, a family rebuilds its life. (Goodreads)

When eighth grader Bart Rangely is granted a "mercy" scholarship to an elite private school after his father is killed in the North Tower, doors should have opened. Instead, he is terrorized and bullied by his own mentor. So begins the worst year of his life. (Goodreads)


Three teens are plucked from the edge of death and given the choice to become time riders, whose mission is to move back and forth in time, protecting the world from potential alterations by other time travelers. Liam was about to go down with the Titanic in 1912, Maddy was on an airplane that was about to be blown-up by a terrorist's bomb in 2010, and Sal was caught in a fire in Mumbai in 2026. Based on the premise that meddling with time can have disastrous results, their job is to keep a look out, find meddlers, and make sure that true history remains unchanged. Using a time bubble centered on the 9/11 attacks as their headquarters, they hide their identity as agents, and under the tutelage of an older time rider and Bob the robot, they begin an adventure that includes war, Nazis, carnage of all sorts, missed rendezvous, a doomsday machine, cannibalistic mutants, and some very hard choices. (CommonSense Media)


In the summer of 2001, twelve year old Fadi’s parents make the difficult decision to illegally leave Afghanistan and move the family to the United States. When their underground transport arrives at the rendezvous point, chaos ensues, and Fadi is left dragging his younger sister Mariam through the crush of people. But Mariam accidentally lets go of his hand and becomes lost in the crowd, just as Fadi is snatched up into the truck. With Taliban soldiers closing in, the truck speeds away, leaving Mariam behind.
Adjusting to life in the United States isn’t easy for Fadi’s family and as the events of September 11th unfold the prospects of locating Mariam in a war torn Afghanistan seem slim. When a photography competition with a grand prize trip to India is announced, Fadi sees his chance to return to Afghanistan and find his sister. But can one photo really bring Mariam home?


Based in part on the Ms. Senzai’s husband’s own experience fleeing his home in Soviet controlled Afghanistan in the 1970s, Shooting Kabul is a powerful story of hope, love, and perseverance. (Goodreads)

Do you have any others to add, Mayhemers? What about your memory of 9/11? Where were you when you heard the news? What impact did it have on your life?