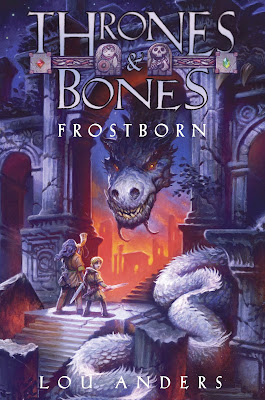 Before we begin, here is the jacket copy, from Goodreads:

Meet Karn. He is destined to take over the family farm in Norrøngard. His only problem? He’d rather be playing the board game Thrones and Bones.

Enter Thianna. Half human, half frost giantess. She’s too tall to blend in with other humans but too short to be taken seriously as a giant.

When family intrigues force Karn and Thianna to flee into the wilderness, they have to keep their sense of humor and their wits about them. But survival can be challenging when you’re being chased by a 1,500-year-old dragon, Helltoppr the undead warrior and his undead minions, an evil uncle, wyverns, and an assortment of trolls and giants.

FROSTBORN is the first volume in the series THRONES & BONES, a new MG Fantasy by debut author Lou Anders. Lou is the former Editorial Director at Pyr Books, the science fiction and fantasy imprint of Prometheus Books. He was nominated for the Hugo Award for Best Editor (Long Form) 7 years in a row, and won the award in 2011. He has also been nominated for many other awards, such as the World Fantasy Award, Nebula Award, Philip K. Dick Award, Locus Award, and the Chesley Award, among others.

Before I get into my personal reaction to the cover of this exciting new book, you can find out more about Lou, and the THRONES & BONES series, if you're curious, at:

So, let me just say how much I love this cover! One of my favorite things about Middle Grade books (and especially by comparison to YA) is how often they end up with gorgeous illustrated covers. Photos are fine, and I'm sure the models need work, but there's just something magical about a hand drawn cover.

And this one certainly does not disappoint. It begins with the design, which starts with a lovely font, whose blade-shaped serifs seem to fit the world perfectly, that is complimented by kind of hand-carved looking jeweled encrusted stone brackets. The attention to detail, especially in the little skeleton and warrior carvings, is phenomenal.

And things only get better from there. We have a dragon, which is always a good thing, and not only is his snout and pair of glowing eyes perfectly menacing, but we have an interesting look at his body or tail, where it curls through the broken columns of these ancient ruins. Are those scales? They almost look like fur or even feathers.

From there, we can move on to the highlight: our main characters. I love that we see them small enough to give the setting and the dragon room to shine, but that we also can see them well enough to get a good sense of who they are, and especially that Thianna, being half-giantess, is so obviously and adorably much taller than young Karn.

The cover illustration and design is by Justin Gerard.

Moving on, here's Lou with the Hugo he finally won: 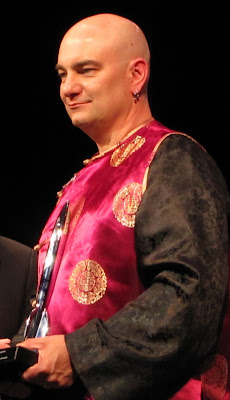 I had originally planned on analyzing the first page of the novel, along with the cover, which I have done in the past, and is always fun, but Lou, in his infinite peparedness to be available to anyone and everyone with any modicum of love for SF/F, agreed at the last minute to a mini-interview, so instead, I offer you a tiny 3 question peek into the mind of Lou Anders, and how one of SF/F's most well known editors decided to delve into the netherrealm of the debut novelist:

1) Personally, I love writing middle grade fiction, and especially middle grade fantasy, because I feel middle grade readers are at that age where their imaginations are really beginning to come alive. Having worked in adult and young adult fiction for some time now, was there anything in particular that led you to write the THRONES & BONES series first as you transitioned into becoming an author yourself?

Well, it wasn’t first. I had two unsold manuscripts getting to this point. The first was a YA. The second was a YA that was turned into a middle grade at the behest of an editor. And then there was Frostborn—the classic case of setting out to write not what was expected but what I most wanted to write myself. I grew up on fantasy fiction—it’s my first love—and Frostborn was my attempt to write epic fantasy and swords & sorcery fiction for kids, to get across that sense of amazement you get the first time you visit an imaginary land. I built a world I’d want to visit and then I did.

2) Tolkien famously drew on the Prose Edda in his THE LORD OF THE RINGS books. FROSTBORN is somewhat inspired by Viking culture and Norse mythology, correct? What does drawing on a subject that is so rich in history, style, and aesthetic do for storytelling? Have you found that it makes world-building, for example, easier, harder, or simply different?

It’s just the way I do it. To create the countries of Norrøngard, Ymiria, and all the lands on the continent of Katernia, I researched numerous cultures. I worked out time lines to five thousand years. I invented cosmologies and religions. I have an entire book’s worth of notes that isn’t in the book. It’s all “tip of the iceberg” stuff, only the tiniest portion of which peeks its head above water. But because I know it, the bits that do show seem more authentic, more real. It’s a ton of work—I world built for three months before I wrote a line of plot—but I don’t know any other way that works for me.

Fourteen years of being knee deep in other writers’ prose worlds has certainly made me a better writer. In some ways, having to fix what was broken was more instructive than studying what was perfect to begin with. And all the manuscripts that fell short taught me so much about what not to do. I’ve said before, you can often learn more from a bad book - or a just “okay” one - than you can from a great one by studying what didn’t work and why. As to the hardships of changing hats—switching sides of the desk might involve changes in thinking. But I also try to have everything my publisher is going to ask for before they ask for it, since I know what it’s like to wait.