Review: Caroline Carlson's The Terror of the Southlands by Jim Hill

Have you met Pirate Hilary Westfield? No? You should. She stars in the terrific middle-grade series “The Very Nearly Honorably League of Pirates” by Caroline Carlson. Book I, “Magic Marks the Spot” launched (hahaha – nautical jokes…) in September 2013. Book II, “The Terror of the Southlands” left safe harbor (really?) last month, September 2014. 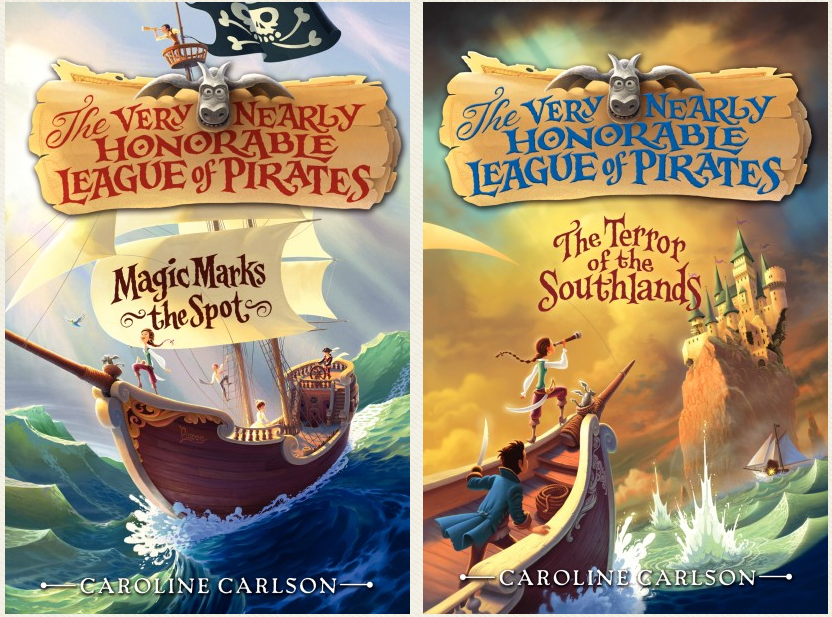 I discovered “Magic Marks the Spot” last year during the pre-launch buzz. I found an audio sample and hit play. When the sample ended, my then five-year-old son hollered, “I want more!” I was shocked. The story had broken through his iPad-induced-hyper-focus. He followed every word. He was hooked (even if he was still face down in the iPad Minecrafting for Angry Birds).

We bought the book and tore through it during nightly bedtime reads. Then we waited, and waited for September to roll around again for Book II.

Oh, sequels. As a reader you can’t wait, but there’s that little sliver of doubt. Will the sequel be Empire Strikes Back great or Blues Brother 2000 bad?

Fear not, scallywags, The Terror of the Southlands is Empire Strikes Back great.

Once again the Hills gather at the appointed time (bedtime) to follow the harrowing adventures of Hilary and her merry band of pirates. So, what makes these books so good? Um, everything?

I love the story, the characters, the deft hand of an author balancing humor with adventure, the world building, the magic rules, the mystery. Did I mention the humor? Laugh out loud funny and noggin scratching plot twists abound.

And I really love that my son is cheering for a female protagonist who gets by on her skills and dogged determination, who won’t let her world’s stereotypes hold her back from her goals, and who gets the job done. That’s important because I want my son to know heroic girls that are awesome, and not just half-baked secondary characters. Which is not to suggest that the book is didactic or preachy in any way. Hilary rules because she handles her business, and takes no guff.

Okay, so maybe this isn’t much of a review. I refuse to offer plot points or spoilers. What I do offer is a 21 cannon salute to these books, and a hearty yo-ho-ho-you ought to race right out and get them.

Bonus Link: Caroline has an excellent post on Through the Tollbooth that discusses some writing choices she made about chapter length in this series. Writers take note!