My 2015 Caldecott Quandary by Jim Hill 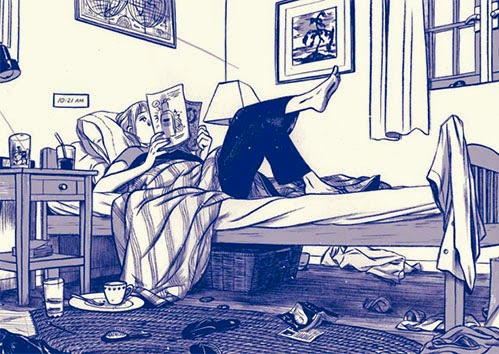 It has been a fantastic, groundbreaking awards season for graphic novels. El Deafo was named a Newbery Honor, and This One Summer earned both a Printz Honor and a Caldecott Honor.

Wait, what? There’s a book that can get both a Printz–the YA award–and a Caldecott? The Caldecott? The one for picture books? For little kids? You’re seriously telling me this? Shut up.

Right? I thought the same thing. I hadn’t yet read This One Summer when the awards were announced. I had seen the cover, and thumbed through it at the bookstore, so I knew it to be a beautifully illustrated book. As soon as the snow stopped and the libraries opened again (hash tag snowmageddon), I got my hands on it.

The illustrations are fantastic. Evocative, well paced with an artful use of splash pages that break out of the panel format to mark chapter endings and important story points. It’s blue–a choice made in production by Jillian and Mariko Tamaki that, in my opinion, elevates the art and the emotional stakes while at the same time softening a sometimes difficult story by providing a little psychic distance for the reader. Blue is a calming color after all. It’s also entirely appropriate as it relates to the setting at Awago Beach, and the importance that water plays in the story.

So why don’t I love the idea that it received a Caldecott Honor? Age range and subject matter.

Let me try to explain. Um, justify. Er, rationalize. Crap, this is awkward.

The material in this book is not easy stuff. It’s a coming of age story that deals with newfound sexual desire, teen pregnancy, infertility/miscarriage, parental disharmony, and even touches on class/socio-economic issues.

So, first let me say, holy cow, well done Jillian and Mariko. This is great stuff, handled authentically, honestly, and experienced deftly through the eyes of the main character.

Slap two Printz awards on the cover, and call it a day. I am all in.

But the Caldecott? You’re killing me.

To me, and I’m willing to bet to most people, the Caldecott is the picture book award. I fear there will be censorship/banning discussions fueled by parents who are upset that this material landed in their children's hands by virtue of a sticker. One look at the negative Amazon reviews reveals exactly that. What boggles my mind about those negative reviews is the objection to language, not subject matter. But that’s an argument for another day–tentative title, “What’s Wrong with You? Words Are Not the Problem, You’re the Problem.” But I digress.

Technically, This One Summer totally qualifies for the Caldecott Honor. But emotionally? Instinctually? I think the committee misstepped.

Yes, the Caldecott's second criteria says, "A ‘picture book for children’ is one for which children are an intended potential audience. The book displays respect for children’s understandings, abilities, and appreciations. Children are defined as persons of ages up to and including fourteen and picture books for this entire age range are to be considered." But has there ever been one recognized that pushes that upper limit so hard?

Parents, teachers, and librarians are confused. That doesn’t help the credibility of the award. The negative Amazon reviews and this post (with subsequent discussion in the comments) on the Hornbook blog illuminate the issue nicely.

I don’t know. On the one hand, I am over the moon that graphic novels are getting attention, sales, and shiny award stickers. Cartoonist Dani Jones might have said it best on twitter:

In my wildest dreams of winning an Eisner, Caldecott, or Newbury, I thought I had to master 3 disciplines. Turns out I can just make comics.
— Dani Jones (@danidraws) February 2, 2015


And Matthew Winner, of the excellent Let’s Get Busy podcast, nails the reason we should all read El Deafo in his Washington Post op/ed piece.
Graphic novels matter. This is great. In an online discussion with alums and students of VCFA about this issue, it was suggested that maybe it's time for a specific graphic novel award. Not to eliminate graphic novels from contention for other awards, but to shine a light on them alone. Skip age ratings–that’s a big ol’ can of worms that almost no one can come to consensus on, but celebrate the writing, the art, and the storytelling for what it is by virtue of its unique format.

David Elzey suggested an excellent name for it: The PILKEY YANG award (for Dav Pilkey, Gene Luen Yang, naturally). Sounds good to me.

My thanks to that secret board of VCFA’ers for helping me clarify my thoughts, and a special shout out to Robin Herrara for rightfully turning me around on my second (undisclosed) problem with this award for This One Summer.

Do yourself a favor–read the book and make up your own mind.