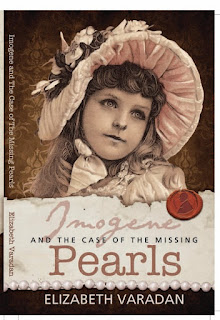 Today I’m interviewing Elizabeth Varadan, author of the middle grade mystery Imogene and The Case of The Missing Pearls, featuring Sherlock Holmes. I think you’ll find her experience in writing about a classic character interesting.

Tell us a little about your book.

Imogene is a ten-year-old girl in Victorian England. Her father is a banker, so they have a few servants, and Imogene has a governess who teachers her piano, handwriting, embroidery, and the like. A real education isn’t considered necessary for a girl of her place in society. Her job in life is to develop skills that attractive a rich husband.

But Imogene, from snooping the cases in the newspapers the adults have discarded, thinks she would rather be a detective. When her mother’s pearls go missing and Sherlock Holmes is called in, Imogene sees her chance to learn from great detective. She manages to get him to let her be his assistant and keep track of what goes on in the house. At the kitchen door, she meets Rusty, Mr. Holmes’s messenger, and a friendship develops between them as they try to solve the case themselves. (Rusty becomes her self-appointed partner.) Being headstrong, Imogene decides to take matters into her own hands, and her life is soon in danger.

How did you get the idea to do a Sherlock Holmes story? Why this story, with this heroine?

A trip to the Sherlock Holmes museum planted a little seed in my mind. And a book I found in a used bookstore with a younger protagonist, Kitty and Mr. Kipling, by Lenore Blegvad made that little seed grow. In Kitty and Mr. Kipling, a little girl in Vermont becomes friends with Rudyard Kipling when he and his family move next door for a year. It’s actually based on reality, but the idea took hold that it would be fun to write a story about a young girl who becomes friends with Sherlock Holmes. (I’m a Sherlock Holmes fan.)

That put me in Victorian England, and I had to figure out how they would become friends, given his personality. That problem suggested a mystery, and the mystery would have to take place in Imogene’s home, as young girls couldn’t be out and about on their own without chaperones, etc. (The name Imogene came from my ten-year-old alter ego, when I was a Nancy Drew fan and wanted to be a detective.)

Did you look into the legal ramifications of writing about Sherlock Holmes before you started? Did you have a publisher in mind?

None of that to begin with. I just had fun writing the story. And then I started submitting it around. One editor kindly told me about the legal aspects: In the United States, the copyright for Doyle’s characters still operates, so I had to get permission from the Conan Doyle Estate to get my book published. A little research led me to the American lawyer for the estate, Jon Lellenberg, who has been a jewel. The license cost $250.00 to get the license, and they get a percentage of your royalties after the $250.00 is used up. But I don’t mind that. Doyle created one of the most famous characters of all time, and why should everyone benefit from that if they can’t too? It also boosted my confidence when I got the license. Someone besides me thought the book had possibilities.

MX Publishing has a large selection of Sherlock Holmes titles, many of them for adults. How did you connect with the publisher? What was the process of working with them?

Jon Lellenberg suggested MX. Steve Emecs has been great to work with, and it’s been nice to connect with other writers of Sherlock Holmes fiction. Most of them are devoted fans that know a lot more about the canon than I do, and I’ve made friends with some of them. Now I feel like I have more experts to consult for the sequels I’ve planned.

Do you have plans for more books following Imogene and Sherlock Holmes?

I do have two sequels planned for Imogene and Rusty (and of course, Sherlock.) But I’m also working on a “cozy” mystery for adults, and I’ve been working forever on a story that takes place in Sacramento, 1919, and features a ghost. Some books just take longer than others to get right, but this is a book near and dear to my heart. 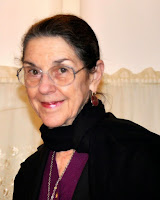 Thanks for sharing your story, Elizabeth.

Thanks so much for having me on your blog. It’s a pleasure to be here.