The first time I noticed former Project Mayhem contributor Marissa Burt was on the Absolute Write message boards. I noticed her because her avatar was the cover for STORYBOUND, her (then) soon-to-be-released debut MG novel.  Marissa had won the debut author lottery with her amazing cover by Brandon Dorman, though, to give credit where credit is due, the artist had an incredibly rich world to work with in Marissa’s debut fantasy duology, set in a boarding school for fairy-tale characters.

STORYBOUND's follow up, STORY'S END continued the awesome cover luck with a contrasting cover that carried through the same sense of wonder and excitement.


When the first book of her second duology came out in October, it was clear Marissa had some serious MG cover mojo. The gorgeous cover of A SLIVER OF STARDUST, a Mother Goose-inspired fantasy, was done by Jakob Eirich, and it immediately drew the interest of my household’s resident 10-year-old.

So how to follow that up? Because A LEGEND OF STARFIRE is due out in October. Could Marissa’s amazing cover-streak hold?

In fact, it did! A LEGEND OF STARFIRE’s cover is as intriguing and evocative as all her others. Before the cover reveal (and ARC giveaway!), here’s a description of the book.

Apprentice Fiddler Wren Matthews thought she wanted nothing more than to resume her alchemy lessons at the Crooked House. But an urgent appeal from a friend sends her to the steampunk otherworld of Nod where stardust is mysteriously disappearing and horrific nightmares threaten everything the colony of Fiddler Magicians has built. Aided by her friends, Wren braves danger from the power-hungry leaders within the city walls and battles the half-animal, half-machine experiments-gone-wrong without in an effort to solve the mystery before the magic of Nod is lost forever.

So are you ready for the cover of this fantastical steampunk MG? 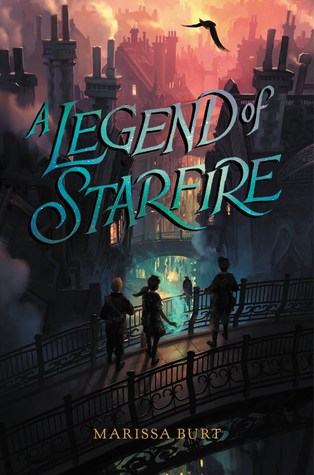 So if you’d like to win a signed ARC of A LEGEND OF STARFIRE, just leave a comment and tell us about some of your favorite middle grade covers!
Posted by Joy McCullough-Carranza at 5/02/2016