GREENHORN is now a movie (Posted by Michael G-G) 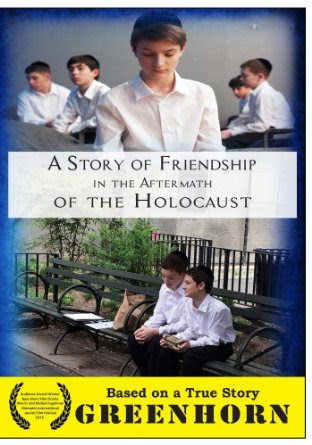 GREENHORN, based on the novel by Anna Olswanger

Today is Holocaust Remembrance Day, a fitting day to feature the short independent film Greenhorn: A Story of Friendship in the Aftermath of the Holocaust, based on the novel GREENHORN, which I reviewed on Project Mayhem in 2013.

GREENHORN tells the story of the friendship between Aaron, a stuttering boy in a boarding yeshiva in Brooklyn, and Daniel who is one of twenty boys sent to the yeshiva from Poland--boys whose parents died in concentration camps. Both boys are outsiders, and both are subject to bullying from some of the other boys in the yeshiva.

GREENHORN's author, Anna Olswanger, is both a writer and a literary agent. There is a great interview with her on Darcy Pattison's blog, where she answered questions about her role as the co-producer of the movie. The movie went on to be named the 2015 Audience Award Winner for Best Short Film Drama at the Morris and Mollye Fogelman International Jewish Film Festival in Memphis, and subsequently aired on public television in Memphis and Kentucky. In February, 2016, it was part of the Festival Internacional De Cine Judio en Mexico and in March was screened at the International Children’s Film Festival at L.A.’s WonderCon.

I was hugely impressed by the performances of the young actors, particularly the boys playing Aaron and Daniel as well as Herschel, the loudest of the antagonists. The cinematography was tremendous (the film was shot in New York City as well as Louisville, Kentucky) and the musical score was evocative. It would be an excellent resource for a unit on The Holocaust. TMW Media has just started distributing the film so that libraries and schools can purchase the DVD with public performance rights and show the film in classrooms.

TMW is also distributing the film on Amazon to individual viewers.

A fabulous and very comprehensive Discussion Guide is also available, which I highly recommend taking a look at. Here is the movie's trailer.


I loved reading GREENHORN three years ago, and it is a joy to see Anna Olswanger's story make it to the screen. The horrors of The Holocaust will never be forgotten, but GREENHORN, with its epigram from Proverbs 17--"a friend loves at all times"-- is a testament to the strength of the human spirit and the power of friendship.
Posted by Michael G-G at 5/05/2016