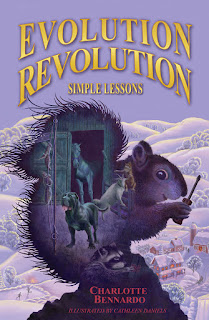 Back in October 2016, I came across book one in author Charlotte Bennardo's Evolution Revolution trilogy. Simple Machines introduced me to the intrepid and fiendishly clever squirrel, Jack, who won my heart by leading a band of woodland critters to defend and preserve their natural habitat from development.

Book 2, Simple Plans, came out in early 2017, and now we have the culmination of the story in Simple Lessons. This is a bitter-sweet tale because, although Jack once again triumphs, it is not without cost. (I won't spoil it for you. Suffice it to say that, in victory, Jack suffers a couple of grievous losses.) Here's the plot from the back cover:

Even though his woods are safe from the construction machines, Jack, the squirrel can't go back. The scientists who captured Rat, and his sister's mate Jerk, are searching for him and show up at his human friend Collin's house. To save Jack, Collin and his mother take him to an animal sanctuary. There, Jack meets Addy and other rescued squirrels, along with Horse and a group of barnyard animals. Collin visits, bringing Mina the talking bird and teaches Jack the last simple machines: the pulley, the lever, and the gear. Jack shares what he learns with Addy, but Hawk and the scientists are hot after him. One final battle between humans and animals erupts. If Jack wins, he'll have to run away from everything he knows. If he loses, he'll never be free.

All the strengths of the first two books are in evidence in the culmination of the series. Jack is a winning character who shows great leadership. The supporting cast is full of lively personalities--my new favorite is the loquacious Mina, the talking bird, who is a mimic of great skill. (I would love to do her voices in a classroom read-aloud!) There is danger from all corners--but also tender moments when Jack says goodbye to characters that are dear to him. The choice is stark: he could live caged, either by the scientists or, to a lesser extent, at the sanctuary. Or he could roam free. The reader will be delighted by the ending, with Jack at his defiant best.

As always, the illustrations by Cathleen Daniels are top notch!

Now that all three books have been published we readers don't have to wait: we can read them (again!) in one sitting! Yippee!!!

Once again, I invite you to visit Charlotte Bennardo's blog, Author on the Loose, for insights into the writing life.