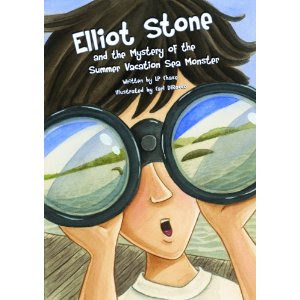 Elliot Stone and the Mystery of the Summer Vacation Sea Monster
Written by: L.P. Chase
Illustrated by: Carl DiRocco
From the back cover:
Elliot Stone's Summer is ruined! not only will he be away from his best friend Jake, but he'll have to miss Cassie's graduation party of the century while he spends an entire month in a Vermont cabin on Lake Bomoseen. After Elliot's dad shares the legend of the Loch Ness Monster, a month at the lake suddenly doesn't seem so boring. The situation quickly escalates as Elliot encounters a strange sighting in the lake. But when he meets Marley, the totally cute girl next door, they embark on a mission he hadn't quite planned on.
My thoughts:
It was after I finished reading the book that I discovered L.P. Chase has written several other Elliot Stone novels, so readers may already be familiar with the cast of characters. This was my first foray into Elliot's world, and I thought it was an overall success.
The writing is nice, the story has a good pace, the characters are interesting, and the setting took me back to happy camping memories. I've always been a big fan of mysteries, so seeing the twists and turns of a puzzle for this age-group makes me happy, and I think readers will enjoy the Loch Ness references and sleuthing.
The mom side of me prickled a bit when the story opened with Elliot griping about missing a party because he was going on the annual family vacation, something he usually looks forward to every summer. I know kids can have attitudes - I have three boys after all - ha! - but I was immediately distanced by Elliot's complaining. (Admittedly, I can't say a kid would feel the same way. ;) I am happy to report that things cleared up rather quickly after that, and Elliot proved to be a relatable character after all.
Finally, a word about the illustrations. I loved them! And so did my just-beginning-to-read son. He was immediately drawn to the cover and interested in the story. Job well done!
While Elliot's adventures are solidly middle-grade, this book falls on the younger end of the spectrum. I think a reader making the transition from chapter books to middle grade fare would find Elliot's adventures a nice addition to his or her library.
Thanks so much to Blue Marlin Publications for sending me a copy of the book!
Enter to win a copy of Elliot Stone, follow Team Mayhem and leave a comment telling us a favorite camping memory (or book)!
Posted by Marissa Burt at 3/30/2012