Elliot and the Goblin War Trilogy
by Jennifer Nielsen

Most of the hoo-rah surrounding Jennifer right now is about her upcoming release of THE FALSE PRINCE, which we're all eagerly awaiting.  What we haven't heard much about is the upcoming release of the third book in her Underworld trilogy--which is positively AWESOME! Both books are scheduled for release on April 1st.
After reading Elliot and the Goblin War with my 10-year-old son and laughing like lunatics, I knew I had to contact Jennifer and help get the word out about this series. It is way too much fun! She was kind enough to agree to an interview, and once I got over my fan-girl screeching, I came up with a few questions for her. But first, a little bit about book one. 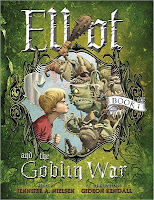 Elliot and the Goblin War - Booklist Blurb
This opens with a warning: only seven children who have read this book lived to tell about it. In truth, this is more silly than scary, though kids might like that, too. Elliot is out trick-or-treating one Halloween night when he runs into a girl in an elf costume being chased by goblins. As it turns out, she really is an elf—well, actually a brownie—and the goblins are after her. For reasons that involve the delicious taste of brownies, the encounter leads to a war launched by the goblins against the brownies, into which the human Elliot finds himself dragged. In fact, he becomes king of the brownies and thus responsible for their welfare. Oh dear. Funny names (Fudd Fartwick, Tubs Lawless) and unexpected events (almost being scared to death) tumble through the pages, and Nielsen writes about them with tongue in cheek. Elliot and the goblin on the cover should draw ’em in. Grades 3-5. --Ilene Cooper


Does that sound awesome or what?
And the upcoming finale . . .
Elliot and the Last Underworld War: Underworld #3
Goodreads Blurb: 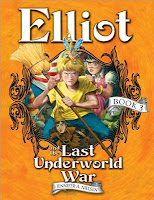 Being King of the Brownies is no easy job! Elliot outsmarted the Goblins and foiled the Pixie Plot, but now he's being threatened by a giant Yeti. Oh, and there's a mermaid hiding in his bathtub. Elliot might be able to survive some unusual self-defense lessons and a kingnapping plot, but can he withstand the friendship of the neighbor girl--his archnemesis--Cami Wortson?
And now for the interview!!
1. Tell us a little about yourself and your books.


Thanks so much for having me as a guest on your blog, Shannon! My debut book was ELLIOT AND THE GOBLIN WAR, about an 11-year-old boy who becomes king of the Brownies and accidentally launches an interspecies war. The final book of that trilogy, ELLIOT AND THE LAST UNDERWORLD WAR, is out on April 1.
I’m also the author of THE FALSE PRINCE, which I’ll release with Scholastic on April 1 as well, about a defiant orphan who becomes trapped in a contest where he must either commit treason by impersonating the kingdom’s lost prince, or be killed.
For me personally, I’ve lived in northern Utah throughout my life, love to travel, and have an incurable obsession with dark chocolate. Or, if it is curable, I’m not asking how.
2. Many of our readers are also writers. What advice would you give to aspiring authors for when we hopefully become debut authors?


Whatever your writing goal, consider it the summit of a mountain, then know that there are a hundred ways to the top. But I think it’s very important to keep your eye on the summit so that you are not distracted on the climb. It’s so easy in this field to choose smaller day hikes: contests, blogging, social media, magazine articles, etc. Sometimes these are important milestones along your path – sometimes they are even key to you reaching the summit. However, often they are little more than temporary ego boosts, time wasters, and side trips that keep you from the bigger goal you most want. So my advice is definitely to keep your eye fixed on your goal. And then keep on climbing.
3. In my opinion, one of the strengths of this series is the personality of the narrator and the narrator's comments directed straight at the reader. This is a technique we seldom see in novels (and one I've often seen criticized). How did you decide to use the narrator that way?


It wasn’t really a matter of me sitting down and debating one technique versus the other. It was just the way the narrative emerged. I think a lot of the style is really just my easily distracted mind thinking of funny side jokes as I was writing and wanting a way to work them in.
4. My son thinks you are HI-LAR-I-OUS! And so do I. Can you share any advice about creating fun voices and the use of humor?


Thank you very much for the compliment. I think humor writing is tricky because some things that are funny when spoken aloud don’t necessarily translate to being written on a page. And humor is a personal thing; what is funny to one person might not be to another.
So I think for anyone attempting to write humor, it’s a matter of becoming comfortable with your own style and not trying to please everybody. And take your humor writing very seriously – the one thing nearly all comic characters have in common is that they have no idea how funny they are.
It also helps to really know your audience. In this series, I am definitely writing to middle grade children. One type of humor children tend to enjoy is non sequitur absurdity, such as in GOBLIN WAR, where part of the cause of the war against the Brownies is the Goblins “logically” deciding that this is their best means to get more pickles.
5. The Underworld Chronicles is a trilogy. Did you have the whole series mapped out in your head when you started? Can you share any advice about trilogy writing?


When I wrote ELLIOT AND THE GOBLIN WAR, I had no idea whether it would be a standalone book or a series. If it was picked up as a series, I knew very early on how I wanted it to end, which you’ll read in book 3. But it was fun to explore Elliot’s adventures along the way to the final battle.
I think there are three important things to remember when writing a trilogy. First, be sure that you have a concept that can be carried across the length of the series. So you think of the books as one very long story built on three smaller episodes. Second, that you give each book its own story arc, so each book comes to a resolution. But you also leave enough story for the next book. And third, a trilogy has to escalate. No matter how intense Book 1 is, Book 2 has to be bigger, and Book 3 bigger than that. Readers will also want to see something new from their characters in each book, so they don’t feel that they’re reading recycled words. That can be tricky, but for an author it’s a very exciting challenge.

Thank you so much, Jennifer. I wish you luck with BOTH books. Hopefully, April 1st will rock your socks off!

Now, please help me get the word out about Elliot.
These books are way too much fun to miss!
Posted by Shannon O'Donnell at 3/21/2012