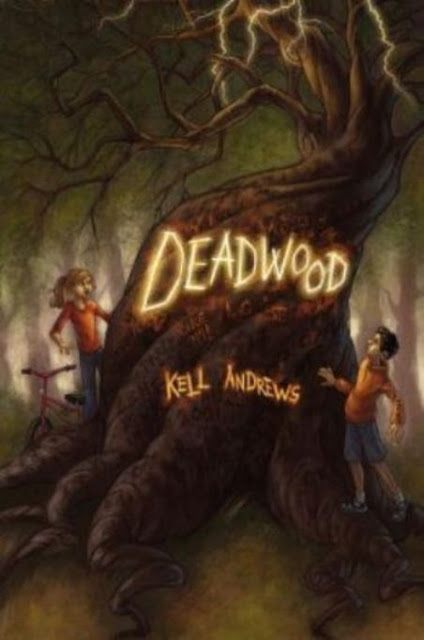 Twelve-year-old Army brat Martin Cruz hates his rotten new town. Then he gets a message from a tree telling him it's cursed -- and so is he. It's not just any tree. It's the Spirit Tree, the ancient beech the high school football team carves to commemorate the home opener. And every year they lose. But the curse is no game, and it's about to get a whole lot worse.

Martin teams up with know-it-all soccer star Hannah Vaughan. Together they must heal the tree, or be stuck in Deadwood Park at the mercy of the psycho who cursed it.

I’m delighted to have author Kell Andrews here today to tell us about herself and her recently released middle grade modern fantasy/mystery, DEADWOOD. First of all, I wanted to say how much I love the cover. Perfect atmospheric setting for the story!

Kell, I don’t want to provide a spoiler, but your use of modern technology as part of the plot was terrific. I’m always curious to ask fantasy writers how they choose their settings. Why did you choose a modern world setting rather than a traditional made-up fantasy world?

I was inspired by real places where I’ve lived. I tried to imagine fantastic events happening there, but I never imagined a portal or a second world. I wanted to invent magic that took place in the real world among kids who were simultaneously tackling realistic middle-school stresses.
I thought a lot about the reaction my characters would have to facing magic – would they just accept it? Would they freak out? Would they try to seek a logical explanation for the impossible things they witnessed firsthand? So that’s why I brought in technology and a really loose interpretation of some scientific phenomena.
What I loved most about the book is what I love about all the best middle grade fantasies set in the modern world. Kids reading it can absolutely believe such a story could happen to them, if they were only in the right place at the right time. When you were growing up, were you one of those kids? Did you wish there was a magical world somewhere close by?
I wrote about magic that seemed like it could really happen in real life because at that age I always wished it would. I believed in magic part of the time, and the rest of the time I pretended to myself that I believed. Life was more fun if anything could happen.
During the middle-grade years, kids have given up on Santa and the Tooth Fairy, but they are at least partially convinced that other kinds of paranormal occurrences could be real – telepathy, precognition, light as a feather, stiff as a board. Not many 10-year-olds can face a mirror at midnight without worrying, at least a little, that Bloody Mary might look out at them. So why not a tree that sends text messages?
Your love of plants comes through very strongly in this book. I’m a fellow plant person myself, so can you tell us more about how you researched the story and what influenced it?
Just about every culture has stories – from fairy tales to religious beliefs -- about tree spirits and beings. When a belief is that universal, I wonder if there’s something to it.
That led me to looking at some of the ways plants defend themselves and interact with their environments. Over the years many people, including serious scientists, have trying to prove that plants have feelings, with mixed results. My reference manual was the 1973 alternative science bestseller, The Secret Life of Plants by Peter Tompkins and Christopher Bird, which explores the idea of plant sentience and popularized the 1970s idea that you should talk to your plants to keep them healthy. While most of those studies have been debunked, plants do have remarkable mechanisms for survival. I drew on both the science and pseudoscience for DEADWOOD.
An added dimension to the story is Martin’s worries about his mom, who is deployed in Afghanistan. Why did you choose that for his character?
From a practical, plotting perspective, I needed to put Martin in a new, strange environment where he had to act independently. There’s a reason that there are so many orphans and boarding schools in middle grade fiction! So I tried to find a realistic reason that Martin would be separated from his mother, and right now many children face the absence of a parent during extended military deployment. Despite the distance, I wanted him have a strong relationship with his mother and I tried to use technology to make her a presence in the story, despite the distance.
And for the writers among us, you do an extremely good job with character development. All your characters were very distinct from each other and seemed real to me. Any tips on writing good characters?
A lot of the characterization came on revision. On the first draft, I concentrated on getting the story down, and Hannah and Martin were less distinct. But as I revised, I got to know them, and I followed each character’s POV and speech during a separate revising pass. I tried to make sure they were distinct in speech and mannerisms and that that everything they said and did was consistent with their character, not just something that moved the plot forward.
Because I like to know this about everyone: What was one of your favorite books from childhood?
A Little Princess by Frances Hodgson Burnett and The Princess and the Goblin by George MacDonald were two of my all-time favorites. I reread them both recently and every word was still just as familiar – I knew them nearly by heart.

You can find Kell on Tumblr: http://kellandrews.tumblr.com/
and at Operation Awesome: http://operationawesome6.blogspot.com/
and on Twitter: @kellandrewsPA

Kell, thanks so much for being here today!~Dee Garretson
Posted by Project Mayhem at 2/06/2013