Recently, I had a colleague of mine ask me how I came up with the concepts for my books. He wanted to know what the inspiration was behind them. The answer didn’t roll off the tongue, but instead, the question made me think long and hard about the answer. How do my ideas come to me?

When I do anything in life I have my eyes and mind open for ways to use it, whether it's in my classroom or in my writing. For example, I remember watching a movie where a group of characters were trying to break into a bank vault and I immediately stopped the movie and jotted down an idea for a classroom activity that I later called Safecracker. While watching that scene, I thought what if my students had a reading passage in which ten sentences were numbered from 0 to 9 and then I had a bunch of combination-locked safes for them to open based on which sentences had errors? I went out and invested in five combination-locking cases and this is how my review activity, Safecracker, came into existence. It's rather simple. First you create passages that have sentences numbered from 0 to 9, and you make sure three of the sentences contain errors related to whatever you're covering (the use of the comma, for example). In groups, students must find the three sentences that have the errors, put them in order from lowest to highest, and then come up and try the combination. If they get the combination right, there's another passage in the next safe, and then another passage in the next safe, and so on...until finally, the prize vault gives them their reward. 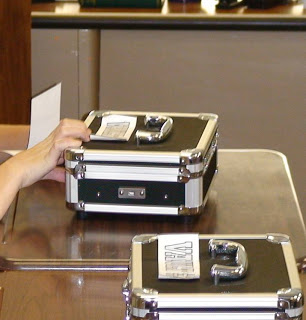 If I were to detail the umpteen times I took something from life and applied it to the classroom, this post would be far, far too long. The same type of method occurs with my writing, as I'm sure it does with many writers. The key is to constantly keep your eyes and mind open. Hey, inspiration can strike at any time, so be ready.

A buddy of mine recently had the opportunity to speak at a TEDx event about inspiration, and I think he did a much better job explaining himself than I did. So here is Tracy Edward Wymer’s TEDx talk: