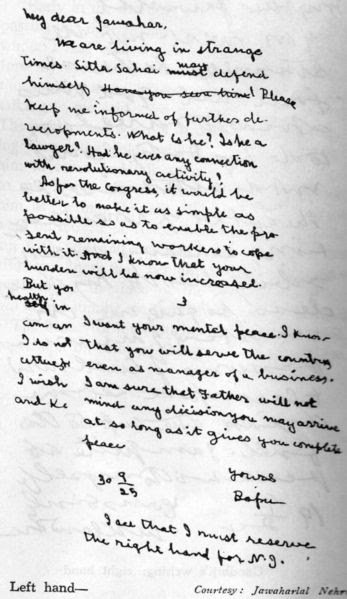 This image doesn't necessarily have that much to do with Middle Grade First Lines (it's a photo of a letter Gandhi wrote), but with so many copyright concerns with web images of late, it seems best to use only images that are in the public domain.

Anyway, today I want to share some first lines. As writers, first lines are something I think we all think about a lot. We certainly have to write them (at least one for each book). And whether they come easily to you, or whether you rewrite them hundreds of times, it can be interesting to think what they mean to readers, and whether they have more or less impact than we expect.

So, I went and grabbed 5 Middle Grade novels from my daughter's room. I read plenty of Middle Grade myself, of course, but she has a much nicer bookshelf than I do, so we keep them in there. At any rate, without further ado, I will share the opening lines from these five mystery books, and say a few things about each one:
Okay, okay. Yes, this is technically two sentences, but I would argue that they are so inextricably linked, they ought to be separated by a semi-colon, not a period. Anyway, that's not the point. The point is: isn't this a great line? It give us character, voice, humor, setting, and a taste of conflict, all in six brief but luscious words. Well done, author, well done.
Maybe I should have done opening paragraphs? Just kidding. Obviously this one line doesn't give us as much as the last pair of sentences, but it still ain't half bad. We've got the feeling of something sinister here, and we can at least infer a bit about setting - a school perhaps, or an orphanage? The key with this one, I think, is specificity. There are all kind of chains, after all, but punishment chains sound like a very specific type of chain, if you ask me.
I'm not sure how much I like this one. It's succinct, sure, and it's rather shocking, too, but it doesn't feel earned, you know what I mean? It's all a matter of taste, of course, and I actually do happen to love this book and this author, but as first lines go, I guess I'm partial to lines that ground me in a scene, and clue me into multiple story aspects at once.
I'll admit, I'm somewhat partial to the old em-dash, and I love it in creative writing. I'm not sure it's used to full effect here, but it doesn't hurt, either. This opening line is all about character, and it pulls it off pretty well. Animal characters always have a little easier time with characterization, I think, because as readers we all already have some assumptions about certain types of animals.
I suppose this one is probably pretty famous by now. I still haven't read this book, but my kids both love it. Anyway, this isn't the strongest of these five openings, but it isn't bad either. Half-blood is obviously an interesting detail, even if we don't know what it means at first, and in the long run it's probably the most important part of this sentence, but I would argue it's the "look," that really makes this opening line work, for me. It's the touch of irreverence to the voice of this narrator that would make me read on, but then maybe I just like angry kids.

Well that's it. What do you all think? Do you recognize any of these books (don't give it away if you do)? Which of these opening lines is your favorite?
Posted by Matthew MacNish at 2/11/2013