ADVENTURES IN THE WORLD OF STEAMPUNK by eden unger bowditch 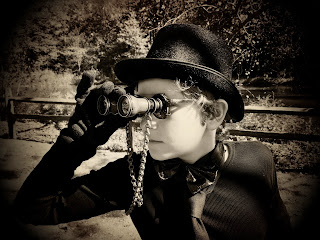 I had never heard of steampunk before I wrote the first Young Inventors Guild book, The Atomic Weight of Secrets… The cover artist, Steve Parke, said he loved steampunk novels. I had no idea what he meant! Alternative history, Victorian sci-fi, turn-of-the-century invention fiction – that’s how steampunk is often described. Since the Young Inventors Guild books take place around 1903/1904 and are science and invention driven alternative history-type of stories I quickly learned about steampunk! There is some fabulous steampunk MG/YA and older steampunk literature out there. I was invited to be on a steampunk panel of authors at the Baltimore Book Festival a couple years ago with Matt Kirby, Kelly Link, and Gavin Grant. It was an honour to share a stage with them and to learn more about this remarkable genre. 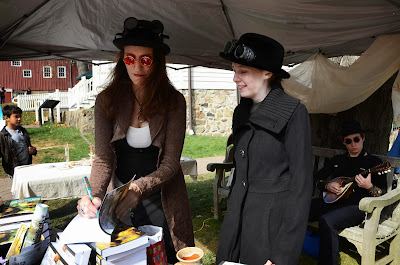 In October I was invited to participate in the International Steampunk Convention in Morristown, NJ and present The Ravens of Solemano… the Young Inventors Guild Book 2. IT WAS AMAZING!!! So many people in fabulous Victorian dress, with inventions and contraptions. Kids of all ages in tophats and waistcoats. And lots of physicists and inventors with much to show. I met a professor from Sarah Lawrence who teaches a course in steampunk physics and invention. There was even a pair of automatons!

Discovering a community that embraces the ideas in your writing is quite wonderful. It was exciting and invigorating to be around so many brilliant minds. I even learned more about the inventions I configured in the books! It was really lovely and definitely food for thought as I move ahead with Book 3.
Posted by eden unger bowditch at 10/29/2013