'Tis the Season...to Give Them Monsters! 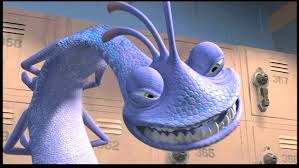 ‘Tis the holiday season, and with that in mind, I’ll refrain from seizing upon this opportunity (it’s Friday the 13th! ) to share quirky, bizarre stuff and an otherwise creepy, twisted, middle-grade related, spooky post….

What I will give you is permission to put darkness in your middle-grade fiction. Give ‘em monsters, and lots of ‘em. It’s the gift that keeps on giving…because while your young readers may insist on sleeping with a Nerf katana, or ask you to sweep the bedroom perimeter one more time, they are (in general) utterly fascinated with the creepy crawly, shadow slinking, mystery of the monster. They might not admit that they’re scared (they're too old for that, maybe), and they may not even understand that they enjoy that fear. That it’s exciting and necessary.

The monster represents everything they don’t understand. Everything they fear and worry about. Christopher Vogler, a veteran Hollywood story consultant and writing teacher, calls these monsters, this darkness, the Shadow. In his book, The Writer's Journey: Mythic Structure for Writers, Vogler says that the Shadow “represents the energy of the dark side, the unexpressed, unrealized, or rejected aspects of something.” Middle-grade readers struggle with A LOT. Depending on the scale of the middle-grade spectrum, we could be dealing with puberty, adolescence, moving, divorce, abuse, relationships, emotions, identity, friendship, and the list goes on and on.

Stories need conflict and often that conflict comes in the form of the monster. Monsters offer wonderful personifications of the Shadow. The Shadow, as a monster, allows the writer to create a story in which he or she addresses those relative conflicts in the confines of the narrative. The monster allows for more traditional storytelling, offering an obvious vehicle for conflict, while providing an entertaining book. Percy Jackson is not battling kittens! He is fighting Medusa and Harpies and all sorts of monstrous creatures.

Middle-grade readers want to be entertained. They want a story they can relate to and enjoy and that offers excitement. What’s more exciting than a good monster to battle? Roald Dahl gave us The Witches, not The Unicorns. In his book, BFG, Dahl gives us flesh-eating giants. Flesh. Human flesh. The giants eat people. They crunch on people’s bones. Dahl certainly didn’t flinch at putting these horrors in the hands of definitely middle-grade readers, and I think these giants personify every seemingly impossible obstacle middle-grade readers face and the gatekeepers they fear stand before them. R.L. Stine didn’t build a reading empire on the back of his Feather Tickle series. No! Goosebumps. And it’s a slight understatement to say they did rather well.

But, to be fair, not every monster has to be big, or scary, or ugly, or have fangs and tentacles. Look at our own beloved Charlottes’s Web. You don’t think that when Charlotte says “Where’s Papa going with that ax?” she sees her father as a monster, at least in that scene? And what does she do? She runs out there to confront him. To face the monster. To do battle. And she wins. She saves Wilbur’s life. She beats the monster.

So, whether you have thought about it or not, whether you realize it or not, monsters, the Shadow, are an integral part of our middle-grade fiction. They give our readers a symbolic representation of their own fear and uncertainty in an exciting and entertaining medium: The Monster.

If you still doubt that there is any room to discuss monsters and holidays, consider The Nightmare Before Christmas in which monsters meet Santa….and kidnap him. Or look to the Germanic lore of the Krampus. American kids get coal if they’re bad. Germanic children get stuffed in a sack and get taken back to the Krampus’ lair to be eaten. I’ll take the coal.

Why am I telling you all of this? Because I want you to give the gift of darkness to your readers. Give them the Shadow. And I want to give you, as writers, permission to box up your unicorns and rainbows, pack away your puppies, and shush the critics who say “today’s fiction is too dark,” and let the mayhem loose.