Notes on a Diversity Hashtag by Kell Andrews

Listening to #WeNeedDiverseBooks, I realized the conversation wasn't about me. And neither are the books I want to read. 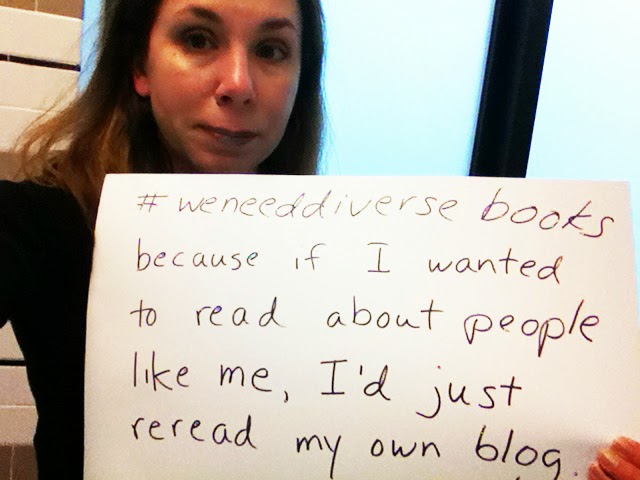 When the #WeNeedDiverseBooks campaign began through the work of 22 writers and bloggers, I was enthusiastic. I was long familiar with the issue through Cindy Pon and Malindo Lo’s Diversity in YA campaign, and I had tried to populate my middle-grade novels with diverse characters. So I joined the conversation.

I tweeted. I favorited. I retweeted.

And as the campaign caught fire, the discussion took off in thousands of directions. #WeNeedDiverseBooks truly went viral. More than 80,000 tweets by readers and writers demanded more books about that reflected their lives and the lives they wanted to lead. The tweets and photos were touching, inspiring, provocative, and challenging.

And as the hashtag exploded, my voice seemed... unnecessary. I was participating as a straight, white, able-bodied person, and the conversation wasn't about me at all. It did not require me.

But I kept listening.

I realized that feeling excluded, marginal, and invisible is how young (and older) readers of color, gay readers, and those with disabilities, have felt about books all along. If a Twitter hashtag made me feel that way for a few hours, I could more easily imagine how decades of non-representation would feel.

The conversation was about me because I choose to see myself in others who are different.

And more than that, it did require me. #WeNeedDiverseBooks so that everyone can see someone on the page like themselves – and those unlike themselves. The point of the campaign isn’t that diverse books are only for certain readers – they’re for all of us. If we want them to be published, we need to read them, buy them, and support them.

I’m thrilled that the #WeNeedDiverseBooks created a groundswell that could not be ignored. The Book Con, to be held in concert with Book Expo America at the Javits Center in New York, will now hold a May 31 panels featuring diverse authors  – Grace Lin, Jacqueline Woodson, Matt de la Peña, I.W. Gregorio, Marieke Nijkamp, Mike Jung, Lamar Giles, Ellen Oh, and Aisha Saeed. And I will still be listening – I’ll be at BEA that day signing Deadwood for Spencer Hill Middle Grade at 1 p.m., so I can hear (and tweet!) the 10 a.m. panel.

Of course, this panel is not the end – it’s a continuation of the conversation and a rallying point for what's next: writing, publishing, buying, and reading books that represent humanity in all its breadth and depth.