Maybe I’m still the cranky cool kid (disclaimer: I was never cool), but I like discovering the Next Big Thing on my own. I’m just going to have to let it go (oh, hi earworm) because when it comes to The Great Greene Heist by Varian Johnson I’ve been beaten to the punch. By everybody.

Twitter’s been all over it as part of the #WeNeedDiverseBooks movement. Indie bookstores got into it when Eight Cousins Books in Falmouth, MA (one of my local faves) threw out their handsellchallenge. Then little known author John Green even mentioned it (I kid, he’s a juggernaut of awesome). 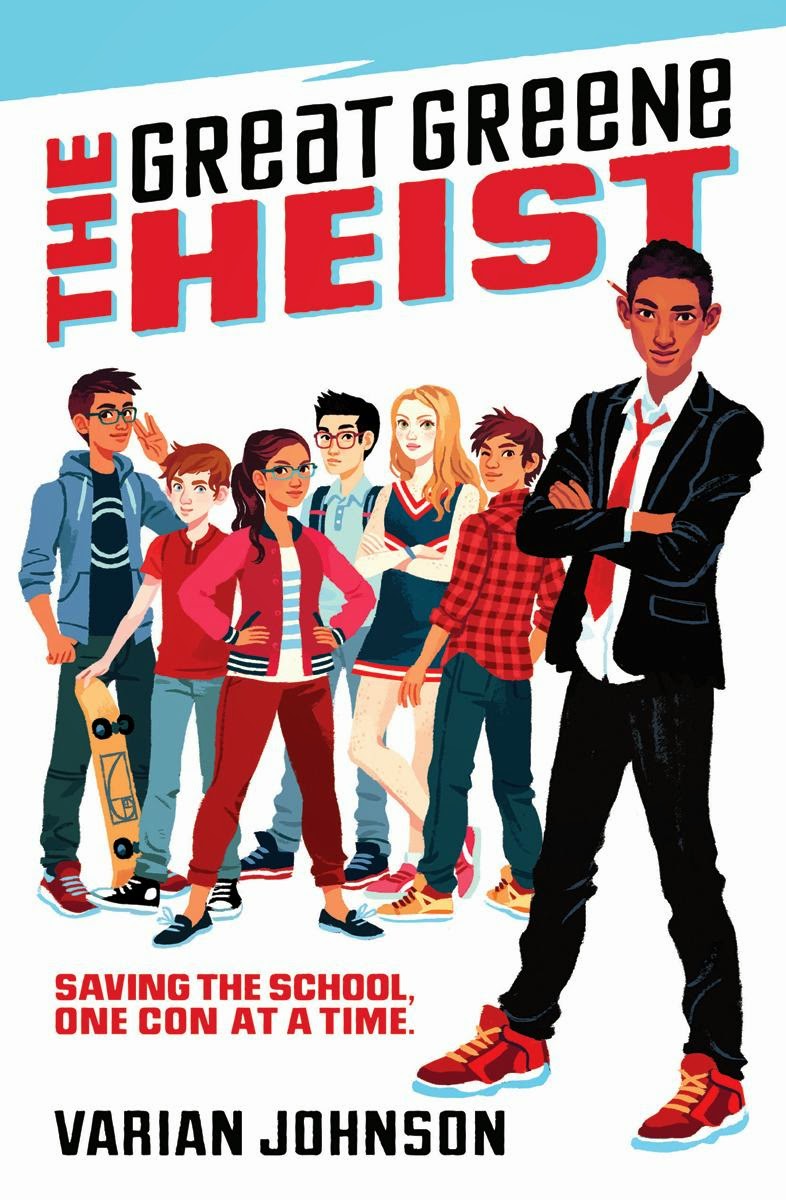 Today is The Great Greene Heist’s book birthday. Instead of feeling left out, I thought I’d bake a cake to celebrate, and share a slice of delicious with you, my new best friends here at Project Mayhem.

There’s a ton of things to like about this book, and even more to love. Fans of caper stories will slip right into the pages. Lovers of scoundrels (think Robin Hood, Han Solo, and Danny Ocean) will find a new hero for their pantheon – Jackson Greene.

Jackson is as cool as the other side of the pillow. Smart, well dressed, good looking and the leader of his own rag-tag band of misfits. Jackson cons his way through life always one step ahead of his nemesis and the school authorities. Like the best rogues he walks the line between right and wrong, and lands on the side of justice.

This book will make you smile at it’s charm, laugh at it’s clever gambits, and cheer when it all comes together. The code names for the cons, a staple of grifter stories, are worth the price of admission all by themselves. Add dash of romance – just a dash it’s not a kissing book – and you have a story that lingers well after the time you’ve closed the cover. I’m not being glib. I finished this book several days ago, and my favorite scenes keep popping up for a slow-motion replay of how’d-they-pull-that-off.

The Great Greene Heist is going to be as fun to reread as it was to read. Is there a higher compliment?

I emailed Varian a handful of questions on Memorial Day (because I'm a jerk), but he was kind enough to answer back right away (because he's not a jerk).

Who came first, Danny Ocean or Jackson Greene? Any other con artists role models we should know about?

Of all the heist movies I’ve seen, Jackson Green was most inspired by Danny Ocean from the Ocean’s Trilogy. I actually started the novel right after seeing Ocean’s Thirteen, though all I had for a long time was a name—Jackson Greene—and a vague idea of writing a heist novel. Of course, a number of heist movies inspired me while writing the novel—most notably The Italian Job, Sneakers, and The Thomas Crown Affair. I also researched real life con men, though they aren’t nearly as suave and sophisticated as their fictional counterparts.

Is there a sequel in the works? (I'd love to read a YA with Jackson's brother, or an historical fiction about his grandfather.)

Yes, I’m working on a sequel right now (which is taking longer than I hoped. It takes place a few months after The Great Greene Heist, and if all goes well, it’ll be out in the fall of 2015.

I hadn’t thought about doing anything with other member of the Greene family, but you never know….

Did you start this at VCFA? If so, can you talk about that a little bit? (advisors, early readers, etc...)

I started the novel a month before my first VCFA residency. I worked on it in bits and pieces with three advisors, though very little of those drafts remain in the finished book. That being said, two people from VCFA were very influential with the book. Tim Wynne-Jones, my fourth semester advisor, helped me to realize that the tone and characters were all wrong in those first drafts, and that I should take a step back and write the novel the way it needed to be written (as a funny, fast read), not how I wanted it to be (an edgy YA). Rachel M. Wilson, my classmate, shared an essay on Ellen Raskin’s The Westing Game, which helped me realize that the novel needed to be written in omniscient point of view.

What's it like to become the center of a grassroots movement for diversity in children's books?

Humbling. Extremely humbling. I’m honored that so many people have championed the book.

Any surprising responses (good or bad) along the way?

As far as reviews go, there haven’t been any real surprises; though I’ve also been fortunate to get some really good trade journal and blog reviews about the novel. That being said, I try to numb myself to the review process once they start rolling in. As a novelist, you do your best, and people either say good or bad things about your book, and you take in what you can and keep working on the next book.

What are you reading now?

I just finished Jennifer Ziegler’s Revenge of the Flower Girls (Scholastic) and am currently reading Greg Leitich Smith’s Little GreenMen at the Mercury Inn (Roaring Brook). They’re both middle grade novels—we’ll be doing a joint launch of all three of our books on June 14.

Any books we should be on the lookout for?

Since I mentioned Rachel M. Wilson earlier, I should note that her debut YA, Don’t Touch (HarperTeen) comes out this September. Another VCFA classmate, Larissa Theule, makes her debut with Fat and Bones (Carolrhoda) in October. They are both great books that I can’t wait to share with everyone.

Thanks, and happy book birthday!