A MASTERPIECE by James Mihaley 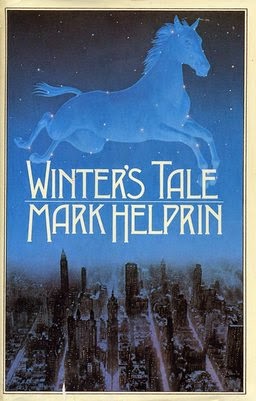 Several years ago, the New York Times Book Review section selected the twenty five best books of the last twenty five years.  They polled hundred of published authors, mostly writers of adult fiction.  The top vote getters were Toni Morrison, Philip Roth and Cormac McCarthy, predictably.  Only one work of fantasy made it onto the list, ‘Winter’s Tale’ by Mark Halprin.

I am continually amazed by how few people, even the most ardent readers, have ever heard of this book.  Like many towering works of art, it doesn’t fit neatly into any category.  It’s too fairy tale-like to be embraced as an adult novel and has enough sexual content, beautifully rendered nonetheless, to be considered inappropriate for kids.  It’s one of those novels that just hangs there in the literary firmament.  Is it a meteor?  It is a planet?  I can promise you one thing.  It should be read by anyone who aspires to write fantasy with a literary flair.

The story centers around a petty thief who has a flying horse.  It is a celebration of New York City unlike anything you’ve ever encountered.  The city itself is a main character in the book.  It is deeply philosophical, deeply whimsical and just plain mind-boggling in its originality.  Halprin’s descriptive powers and his ability to create unforgettable characters elevate him to the literary pantheon.  A movie version of ‘Winter’s Tale’ recently came out.  I caution anyone who has seen it against making judgments about the book based on what you saw on the big screen.  I can’t think of a book that would be harder to turn into a movie than this one.  The novel itself is almost 700 pages long, a 25 hour audio book.  Chunks and chunks of storyline must’ve been hacked off in order to turn it into a screenplay.  In my opinion, forget the movie and read the book.

Not surprisingly, Halprin has written three books specifically for children, ‘Swan Lake’, ‘A City In Winter’ and ‘The Veil of Shadows’.  I just recently discovered them and am looking forward to diving in soon.  But ‘Winter’s Tale’ is widely regarded as his masterpiece.  It established his reputation internationally.  If you’re looking for a fantasy world to hang out in over the holidays, I highly recommend it.  Even if it’s not exactly a children’s book, there is much to learn from it for all of us who aspire to write fantasy for kids.