Anatomy of a First Draft by Dianne K. Salerni 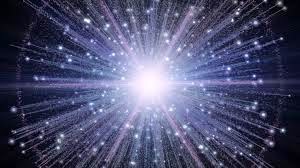 I. Genesis:
Every new novel begins with an inspiration comparable to The Big Bang – an explosion of light and matter and creative force capable of producing an entire universe, not to mention critical acclaim, several awards, and New York Times best seller status.

Of course, in the light of the next day, what appeared to be the genesis of life usually turns out to be one of those sparklers you stick in your lawn on the Fourth of July.  But, hey, any light in the darkness is better than none!

II. Pre-Writing:
Here’s where first drafts begin to diverge.  Plotters will tackle the characterization, plot, and theme with the precision of architects and engineers.

Pantsters, on the other hand, will scribble a couple notes on a napkin before strapping on a harness and a bungee cord and leaping off a cliff.

III. One Quarter of the Way In:
About 15-20k words into the story, pantsters find themselves wrestling an alligator.  It’s suddenly a squirming fury of snapping jaws and wicked teeth, with a thrashing tail and a hide too tough to penetrate.  They realize, while fighting for limb and life, that this is not what they envisioned back in that Big Bang stage!

Meanwhile, plotters look at that carefully designed and meticulously implemented story structure they created and discover it looks more like:

IV. Playing Possum:
No matter where the writer is on the continuum between pantster and plotter, at some point the first draft will look like this:

It’s not dead. It’s just playing dead.  Poke it with a stick.  Poke it again.  Google possums on the internet and verify: It can’t really be dead. It’s faking. Isn’t it?

V. The Home Stretch:
Assuming the possum isn’t really dead, the story begins to move again.  The writer breathes life into it, then can’t stop to catch a breath.  Plotters find themselves back on their outline; pantsters discover their subconscious was right all along.  The story moves so fast, the writer can barely keep up.  Forget sleep. Forget meals.  Forget the children and the husband – they know how to use the microwave, gosh darn-it!

VI. The Masterpiece:
Finally, after a few weeks (or months, or years) of toil, the writer produces the first draft of that brilliant masterpiece, first conceived in a moment of ultimate creativity. 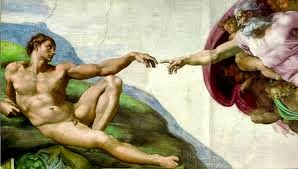 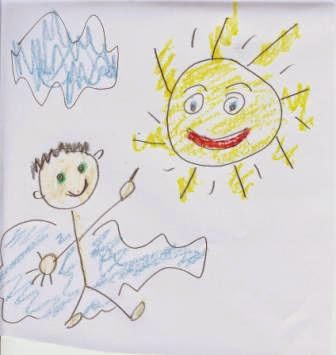 Oh well, it’s yours anyway, and you love it.  Besides, you’ve had some Big Bang-ish ideas for Draft #2, and there’s still plenty of time to get your Michelangelo on!
Posted by Dianne K. Salerni at 12/01/2014