May the Fourth Be With You, by Matthew MacNish

Happy May everyone! For those of you not in the know, May the 4th is Star Wars day. I have personally been on a Star Wars appreciation and rewatching kick lately, ever since this was released:

I was born in 1977. I didn't catch A New Hope in the cinema, or at least, if I did, I don't remember it, but I did see The Empire Strikes Back, and Star Wars, and a deeply embedded love for all things imaginative has been with me ever since. So ever since the new trailer, The Force Awakens (Episode 7) Trailer #2, officially, has been released, I've been on a Star Wars kick.

My daughter (who was born in 1996, and therefore raised on the prequels) and I rewatched the original trilogy. It was wonderful, as usual. Then she made me rewatch the prequels. I'm not like most Star Wars fanatics, in that I don't hate the prequels, but I don't care for them that much either. She does though, and as she often reminds me, "You had your childhood, dad. Let me have mine."

She's 19 years old now, but still. I know what she means.

So we've rewatched all six of the films. And the documentaries that came with our editions of the DVDs. So what next? Well, here is the best Star Wars tie-in I've been trying to expose her to: 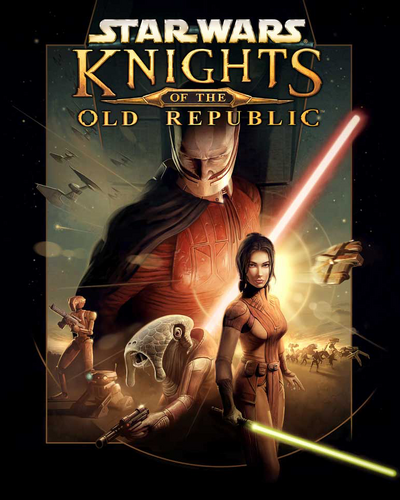 One of the greatest video games ever made, SW: KOTOR is a classic roleplaying game set in the Star Wars universe, during the age of the ancient Galactic Republic, some four thousand years before the films.
Already famous due to Baldur's Gate and Neverwinter Nights (both games for PC) Star Wars: Knights of the Old Republic brought developer BioWAre onto the Microsoft X-Box console, and into living rooms everywhere.

My daughter and I had played some Jedi Academy back in the day, but we had never played KOTOR, so when it recently went on sale at GOG.com (for 3 bucks mind you) we bought it right away.

NOTE: The game is rated T for Teen by the ESRB, so it's not necessarily appropriate for all middle grade readers. Parents please use discretion when deciding what media your children consume.

I could go on and on forever about other awesome Star Wars tie-ins, but that would be a very long post, so instead, here are some honorable mentions:

Star Wars: Knights of the Old Republic II: The Sith Lords (developed by Obsidian, and a friend of mine: lead designer Chris Avellone)

Do you love Star Wars? Are you eagerly anticipating the release of Episode VII this Christmas? What do you do to celebrate May the Fourth?
Posted by Matthew MacNish at 5/04/2015