The Darkness of Nursery Tales by Kell Andrews

The other day my family and I was listening to an audiobook during a car ride -- a middle-grade fantasy that retells a Grimm fairy tale. And of course, the princess's father died right in the beginning.

My husband complained -- he's tired of all the dead parents of children's literature. I defended the plot because that's how stories work. Happy lives make dull books. The main character has to act on her own. She must suffer before she triumphs. She must face conflict.

Still, like my husband, I have tried to shelter my children from some literary losses -- we haven't read Charlotte's Web or The Bridge to Terabithia. We never watched Bambi. We haven't read the gruesomest Grimm tales that fascinated me as a child -- the murdered stepson served as stew, the barrel studded inside with nails.

I remember my daughter flipping through my copy of Sing-Song, A Nursery Rhyme Book by Christina Rossetti. She was attracted by the little girl on the cover cavorting with a lamb, one of the gorgeous original illustrations by Arthur Hughes, the Pre-Raphaelite whose illustrations for George MacDonald's The Princess and the Goblin.

Many of the poems in Sing-Song cover familiar childhood experiences, including many sweet, touching, and funny subjects. But the poems often take a dark turn, familiar to Victorians for whom the living and dead existed side by side.

For example, a poem about a bird: 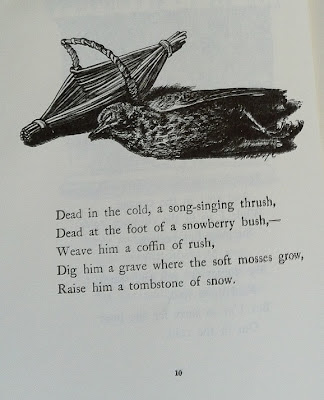 A sweet poem about sisters that takes a dark turn: 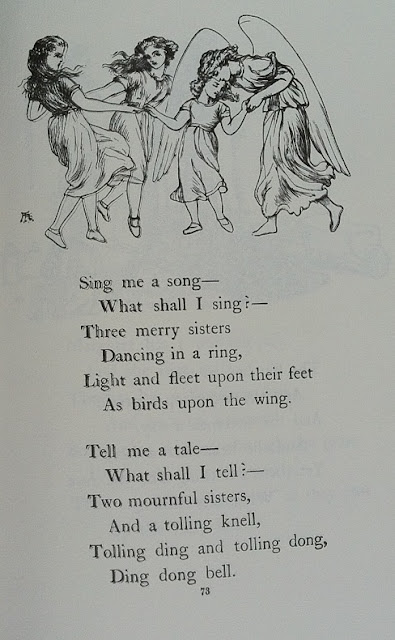 A bedtime poem from which there is no waking: 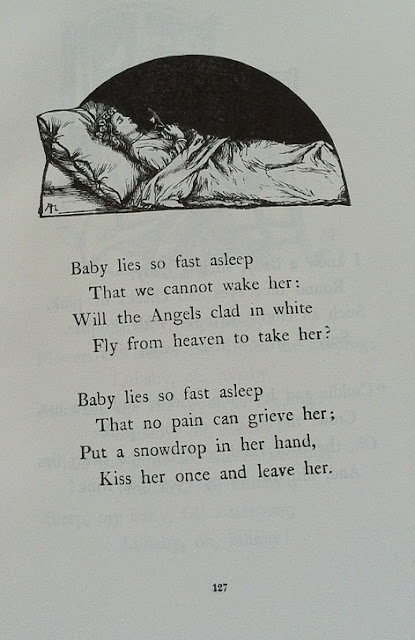 Children's literature has always dealt with death -- fairy tales are notoriously grisly in their original versions, and the origins of many nursery rhymes is similarly macabre. And Victorian childhood has always been a risky world, where infant and maternal mortality was an ever present risk. Literature for children reflected that then, just as it reflects the darker side of our world now. Children still face risk even when we try to protect them.

I don't like torturing my beloved characters, but for readers, these kinds of stories are better than life lessons.  Encountering loss between the covers of a book is far better than in real life.

Recently, I warned my daughter against Harry Potter and the Half-Blood Prince, but she read it anyway and was sorry by the end. But that's how losses happen, in books as well as life. You don't know they will happen until they do.

And when real loss happens, a book offers solace. Others have felt as you do. Others have survived. And so will you.
Posted by Kell Andrews at 5/11/2015