A Conversation about Mystery with Cassie Beasley, author of Circus Mirandus

CASSIE BEASLEY AND I BECAME friends back in graduate school. I remember feeling drawn to her immediately-- she was kind, warm, and clever. But there was another quality that stood out even more distinctly: she had a very particular twinkle in her eyes. A twinkle which I interpreted to mean, "Life is quite thrilling, isn't it?"

This week, Cassie's debut novel, Circus Mirandus, was released to huge buzz. The book has collected starred reviews and the film rights sold months before the release date. I read Circus Mirandus as an ARC and I can tell you that the "Life is quite thrilling" twinkle is reflected on every page. The world Cassie has created is full of mystery, wonder, and pathos. She moves effortlessly between emotional registers and her characters feel at once knowable and larger than life.

A quick summary (cribbed from the publisher):

Do you believe in magic?
Micah Tuttle does.

Even though his awful Great-Aunt Gertrudis doesn’t approve, Micah believes in the stories his dying Grandpa Ephraim tells him of the magical Circus Mirandus: the invisible tiger guarding the gates, the beautiful flying birdwoman, and the magician more powerful than any other—the Man Who Bends Light. Finally, Grandpa Ephraim offers proof. The Circus is real. And the Lightbender owes Ephraim a miracle. With his friend Jenny Mendoza in tow, Micah sets out to find the Circus and the man he believes will save his grandfather.
The only problem is, the Lightbender doesn't want to keep his promise. And now it's up to Micah to get the miracle he came for. 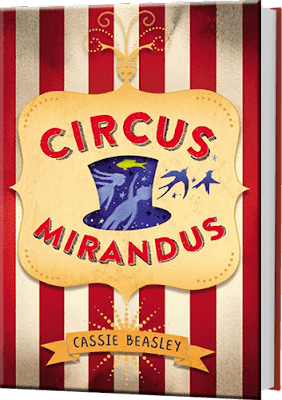 For this post, we decided to have a kind of free form conversation about the book that Cassie wrote and I enjoyed so deeply:

STEVE: For me, your book is really about the idea that others don't have the right to define the "realm of possibility" for us. Micah believes in a story about a magical circus that his grandfather has told him, and he believes in it even though everyone around him is pushing him in the opposite direction.

CASSIE: I love how you phrased that thought.  I've never thought of it in quite that way, but that's such a perfect way of putting it. Because what we choose to believe in or put our faith in is so important, and that's not something that should be chosen for us by others, is it? And I think [Micah's classmate] Jenny is really interesting in that respect because she gets it on some level. Even when she is sure Micah's belief in the circus is incorrect, she's willing to express her own feelings without insisting on his agreement.

Which is exactly what Aunt Gertrudis never does.

STEVE: Right! Aunt Gertrudis isn't just repelled by Micah's beliefs, but also she hates the very idea that he has belief in something mysterious. Which becomes something that we love about Micah. Here's this boy whose aunt is mocking this story of the circus but he has faith, not just because he believes his grandfather, but I think also because he desperately wants to live in a world where magic exists.

CASSIE: Micah's belief in the circus is such a fascinating thing to me because I think, even if it turned out that Circus Mirandus wasn't real, his faith in it is of value to him. It keeps him moving forward. It banishes despair. Do you know what I mean? And when you contrast his attitude with, say, Aunt Gertrudis's, I think it becomes clear that what Grandpa Ephraim has given him with the stories is hope in the face of an otherwise consuming grief.

STEVE: I think that's a deep theme: hope matters. It has an absolute value, regardless of whether it proves well-founded or not. The other thought that your comment leaves me with is: when bad stuff happens, go have an adventure. Grandpa Ephraim carves Micah a refuge that gives him respite from his grief.

CASSIE: "When bad stuff happens, go have an adventure" -- I think that's something Grandpa Ephraim himself might have said. I definitely do think there's an element of that in the story. The book starts with Micah feeling utterly helpless in the face of his grandfather's illness. He's desperate to make a difference, but he doesn't have a way to do it. The plan to find Circus Mirandus is a simple one, but it has such a huge effect on his attitude. It gives him a way to act.

STEVE: Searching for the circus is one thing, but there's also a scene late in the book when grandfather and grandson go to the movies (perfect choice on so many levels, because movies are also a form of "magic" and one which made circus magicians virtually obsolete). Why was that quiet moment-- as the book is catapulting toward the finish line-- so vital to the story you were telling?

CASSIE: The part where Grandpa Ephraim feels well enough to take Micah to the movies is one I worried about when I was writing. I wondered if readers might find it dull, or too much of a departure from the rest of the book, but it's actually one of the chapters that early readers have made a point of mentioning to me in a positive way.

I thought it was important to have it because the book starts after Grandpa Ephraim has already become very ill, and so I hoped that the long night out at the movies would give readers the chance to see him as Micah does. And I've had several people tell me that that part reminded them of time spent with their own loved ones, how sometimes after people are gone the memory of one or two shining, brilliant moments with them stands out forever. I wanted to give Micah and Ephraim a moment like that, and I wanted readers to share in it.

STEVE: It's one of my favorite scenes and one that affected me deeply after the loss of my own father. One thing I've realized over the course of the past year is that you can continue to learn about someone even after they're gone. I think Grandpa Ephraim gives Micah those "shining, brilliant moments" but also gives him a mandate for the future along the lines of Maude in this scene:  https://youtu.be/0ZzNlA9uZ0g?t=104. Which makes me wonder, as Micah embraces the future, will he get new insights into Grandpa Ephraim? Will that relationship continue to evolve?

CASSIE: I think it has to, doesn’t it? Grandpa Ephraim has had such a profound impact on who Micah is and how he views the world. That kind of relationship never really ends, and as Micah grows up, I think he will find himself returning again and again to consider Grandpa Ephraim’s advice and actions. And how he views his grandfather’s choices will change of course, in ways both large and small, because that’s a big part of growing up. But I like to think that Micah will never grow up so much that he forgets what it is like to believe wholeheartedly in something that seems impossible to everyone else.

STEVE: Thanks so much, Cassie! And now for the speed round!