Out of Hiding … Cover Reveal for The Morrigan’s Curse by Dianne K. Salerni

Like many authors, I spend a lot of time imagining what the covers of my books will look like before I see them. In the case of the Eighth Day series, my mental images were wrong every time, but the actual covers were so much better than anything I imagined! 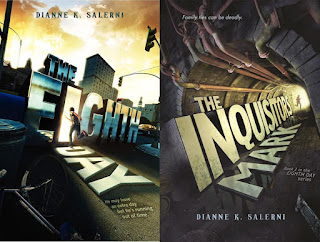 The cover of The Morrigan’s Curse might be my favorite one of all. There are, of course, ties to the other two: The title is integrated into the design. Jax is still running. (Poor kid.) There are everyday items abandoned in one corner, symbolizing an ordinary life left behind. But this cover is also different from the first two. It’s the first to feature any characters other than Jax – and the first to illustrate a specific scene in the book.

So I asked Heather Daugherty, Senior Designer at HarperCollins, and Mike Heath, the cover artist, to join me in presenting this cover reveal, because I had questions for them both.

1. For Heather: This is the first time the cover depicts an actual scene from the book. Why this scene? What are the most important elements in this cover for attracting readers?

This particular action scene from the book stood out to me as a real attention grabber for readers, and I thought the description of the setting and the architectural features in this scene would be very dynamic on a book cover. I think the action happening on the cover with our "bad guys" and the blue fireballs Addie is throwing are lots of fun! Who doesn't love blue fireballs?! And I think the genius idea Mike had to turn the title letters into hanging lights is something any reader will notice right away, and find very different and pretty cool.

2. For Mike: The geometric patterns are fascinating, from the tiled floor and the different levels of the staircase to the ceiling molding and the title hanging perpendicular. How do all these angles work to draw the eye where you want it to focus?

When I was pitching ideas for this series, I thought it’d be unique to integrate the title into the artwork in a fun way—and fortunately, I was selected to help with these titles! The Morrigan’s Curse presented a new challenge because we wanted to use an indoor setting and that immediately meant we would have challenges fitting a long word like "Morrigan" in a small space. The last two books had the fortune of being in large spaces like tunnels or streets but this had to work on a staircase. That being said, I immediately thought of M.C. Escher as he has some very interesting use of space in his work. Additionally, Heather, the cover designer, was drawn to the "never-ending" staircase room from the Harry Potter series, so with those inspirations in mind I began designing the space.

I used white and black because of the book descriptions and this also gave the space a slightly creepy feel which was what we were after. Additionally, I was wanting to create a staircase that you couldn’t see the beginning or end to add to the mystery. Finally, I thought it’d be extra creepy to have portraits on the walls all staring at the viewer with cold expressions! After the space was designed to accommodate large title letters right in the middle of the composition, we began playing with how the title sat in the space. We did everything from hanging it like a chandelier with all letters at different angles and heights to laying it on the banister of the staircase etc. The final composition was the most readable to everyone reviewing the art. Once we had the space layed-out, it was time to light the scene. Lighting is VERY important to most artists and this cover was no exception. We used a mixture of cold outdoor light mixed with hints of warm incandescent lighting which gave a nice balance to the image. I also like using haze to separate elements and this again helped with readability to our title.

3. For Mike: What is your favorite part of the design process — the conception for the cover as a whole or putting in all the details that make the image so rich (ex: the architectural details, the creepy artwork on the walls)?

My favorite part of the illustration process is finding the space with which I’m telling my story in. My work is very much about characters IN a setting and these covers had so many fun elements to work into the final artwork. I usually build anywhere from 1-3 different designs and then spend a while tweaking the final location with color, lighting, and other little details like props that contribute to the mood or story moment. I spend most of my time building ‘virtual’ sets for my covers—meaning, I design the architecture in a 3D program and use a high-end render engine called Vray to help me create my composite images. I typically finish the image by conducting photo shoots with models and then create a final composite in Photoshop. Again, it’s about telling a story with great settings, characters, and action for me.

Thank you, Mike and Heather, for sharing this design process. Before I share the cover, I want to say that I’d really love to live in this house. Well, vacation there, at least. But I’d have to remove the wall art or I’d have nightmares. 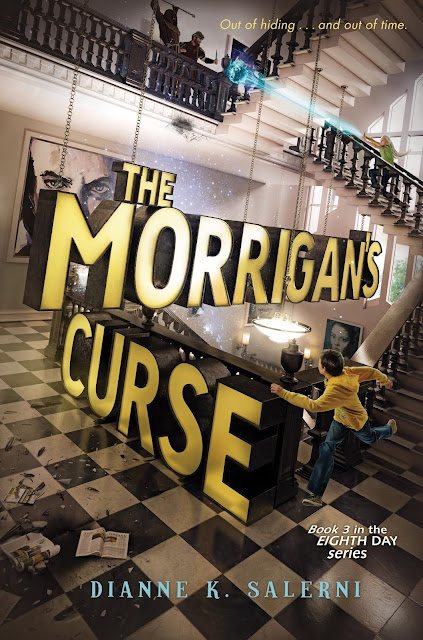 Publication Date: January 26, 2016
Synopsis:
The age-old battle between Kin and Transitioners is escalating and now the Kin have a new weapon: Evangeline’s younger sister, Addie. With magical Emrys blood flowing in her veins, Addie is the Kin’s best chance to break the Eighth Day spell, which will unleash chaos upon the world. Riley and the Crandalls are trying to get her back, but it might mean sacrificing thousands of lives in the meantime, which is an impossible decision to make. As Evangeline’s vassal—sworn to protect her and her people—Jax won’t accept letting Addie’s fate hang in the balance, so he puts it all on the line with a risky plan of his own.
Addie isn’t aware of the war at her heels, or the threat that the Kin pose, but enjoys finally being allowed to use her magic. No longer in the shadow of her sister, Addie finds herself a key part of the Kin’s plan. But when Jax shows up, attempting to rescue her, the Kin pounce—making Addie realize that she’s been walking a fine line between control and utter oblivion.
And that’s not all. The Morrigan is on the loose, pushing both sides of this fight toward annihilation. The conflict is raging, but on which side will Addie stand? With the stakes higher than they’ve ever been, Jax, Riley, and Evangeline must confront the possibility of losing Addie to save the world.