Kelly Milner Halls is the author many non-fiction children's books covering topics as diverse as Astronauts, Cryptids, Dinosaurs, and Saving the Baghdad Zoo. Blazing Courage is her first novel. I will be reviewing it next month, but today I wanted to announce its publication, and take a quick look at its cover and first page.

Here is the cover: 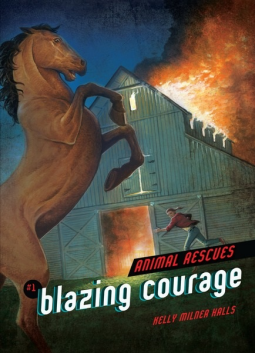 I love the look of it! There's a certain kinetic energy to the moment captured here, and with the human character rushing left, possibly toward the fire, and the terror in the horses eyes, it really sets up a tense situation, and entices this reader to want to know what happens inside the book.

Here is the full jacket and the jacket copy: 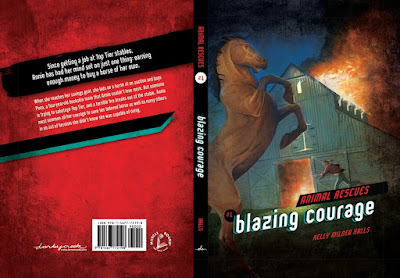 Since getting a job at Top Tier stables, Annie has had her mind set on just one thing: earning enough money to buy a horse of her own. When she reaches her savings goal, she bids on a horse at an auction and buys Poco, a four-year-old Buckskin mare that Annie couldn't love more. But someone is trying to sabotage Top Tier, and a terrible fire breaks out at the stable. Annie must summon all her courage to save her beloved horse as well as many others in an act of heroism she didn't know she was capable of doing.

Here is the first page: 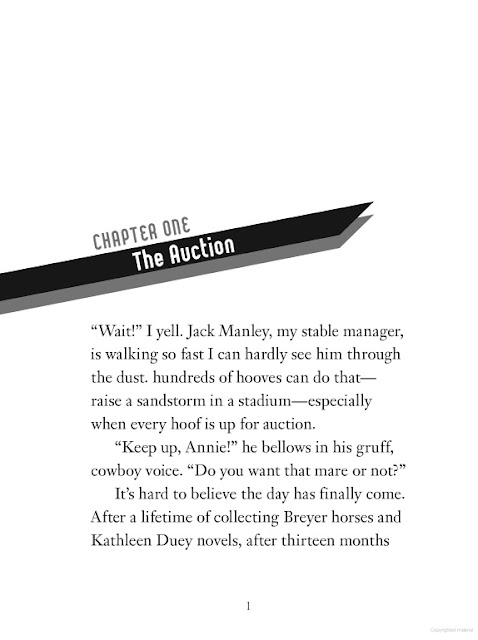 I really like this opening. I like that that story is not only narrated in first person, but in present tense no less! I used to hate present tense, but after writing a manuscript or two in it myself, I have come to appreciate the immediacy it lends to a tale, and the sense of urgency that can be felt, especially when it comes to scenes of action, which is the kind of scene I'm sure a book like Blazing Courage is full of.

I also love that this first page really captures everything I hope to see in an opening. There is action, and even dialog from two characters whose relationship we can immediately understand, but it also vividly describes a scene in a way that allows me to clearly picture it, and ground myself in a setting that feels at once authentic and believable.

I can almost smell the horses and taste the dust in the air.

What do you think? Do you like stories about animals? Do you like adventures? If so, you may want to check out Kelly Milner Halls' Blazing Courage.

Blazing Courage, published by Darby Creek Publishing, a Lerner imprint, will be released on August 1, 2015, and is written by Kelly Milner Halls and illustrated by Phil Parks. It is the first in a series call Animal Rescues.