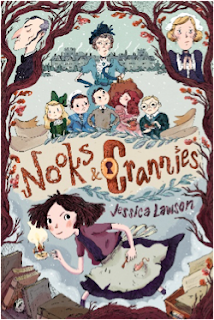 It's my pleasure to turn my Project Mayhem slot over for a guest post from Jessica Lawson. In addition to being an amazing critique partner and friend, she is the author of The Actual & Truthful Adventures of Becky Thatcher, which my nine-year-old has already read twice since it came out last year. Jessica's second novel, Nooks & Crannies just came out on June 2nd, and it has gotten starred reviews from School Library Journal, Booklist, and Publisher's Weekly, and rights have recently been sold to France and Germany!

One lucky commenter on this post will receive a copy of Nooks & Crannies, a Dahl-esque murder mystery with an unforgettable cast of characters spending a life changing holiday in a haunted mansion. I hope Project Mayhem readers love it as much as I did. Read on for Jessica's tips on adding depth to your middle grade novel.

My second novel Nooks & Crannies is, in ways, a farcical mystery. It was pitched to my publisher as Charlie and the Chocolate Factory meets Clue. A bit of slapstick humor. Exaggerated characters. A caricature feel to the setting. A butler. You get the idea—a book for entertainment, not necessarily meant to address more serious themes and ideas. At least that’s how it started.

But if there’s one thing I’ve learned by reading middle grade books, it’s that humor can be the very best medium to explore deeper emotions and themes within a novel. With that in mind, I set out to infuse my farcical mystery with layers. Socioeconomic disparity. Parent-child relationships. The nature of expectations, both the ones parents have for children, and the ones children have for themselves. All that, and a pet mouse, too.

I’ve come to think of layering books in terms of cooking a soup. Too little depth, and the novel won’t be as filling. Get a little butter-flour-wine roux going as a base, and your broth will taste richer. Careful, though; too many spices (aka, details and themes) that fight each other rather than complement each other won’t leave you with as tasty a read. Here are a few ways you can add depth to your manuscript:

*Character Arc: Check your protagonist’s arc and make sure that they’re making a change somehow—in self-confidence, in realization, in strength, whatever. In Nooks & Crannies, Tabitha comes to realizations about her self-worth and her place in the world. Get to the heart of the arc, really give it depth, by embracing your inner 5-year-old-- ask questions and keep asking. Here’s a made-up example:

What does your character want? A new watch. Oh. Why? Because it’s a prize for a contest. It’s a funny book about her trying to win. There’s a prank war and stuff. Funny book, right? Well, why does she need a watch? She doesn’t need it, she really just wants to win. Why? Because she thinks it might make her popular. Why’s that matter? She wants friends. Why? Because while she’s outgoing and competitive, secretly she’s very lonely. You could certainly keep asking “why” here, but that’s the important nugget of information. The fact that your character is secretly lonely is the basis of his/her arc: developing true self-confidence and finding friendship.

*Three-Dimensional Side characters—Flesh out those side characters, even if it’s only with a sentence or two. The baddies in Nooks & Crannies are meant to be over-the-top meanies, but I tried to add, if only very briefly, a bit a character background that might justify their behavior.

*Scene-Level Depth-Check your scenes and see if there’s a way of adding something like weather (wind blowing, fierce amount of sun/heat, fog) or a background noise that could match up with the scene (something ominous, something annoying, something nostalgic) to add an extra layer. Nooks & Crannies features a snowstorm that disturbs the manor’s electricity at key moments. You can also increase tension through resource management—take something away your character needs or add something that complicates the scene.

*Five Senses- Search the manuscript for places you can insert a sense that isn’t being used—a visual, a smell, a taste, a sound, or a texture. At one point in my writing process, I ended a chapter of Nooks & Crannies with a character (no spoilers!) walking down a hallway. Simply adding the sound of knives scraping together in his or her bag/pocket/purse added tension to the scene.

That’s all from me. Happy manuscript cooking. Just leave a comment to be entered in the book giveaway!

BIO: Jessica Lawson does not live in a fancy manor house, but she does deal with mysteries on a daily basis. Most of those mysteries involve missing socks and shadowy dessert disappearances. She lives in Colorado with her husband and children. Visit her online at jessicalawsonbooks.com. You can also find her on Twitter.