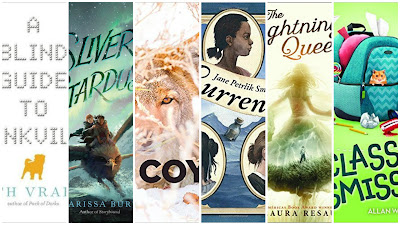 “I figure happiness is three things—

someone to love, something to do, and something to look forward to.”
Bones Brewster is an eleven-year-old slave on a Virginia plantation. Old Mistress doesn’t make life easy when she discovers that Bones has learned to read. When Bones finds her real name in the owner’s slave registry, she tears it out, places it in a bottle, and sets it afloat on the James River.

The bottle drifts across the Atlantic and finds its way to twelve-year-old Lady Bess Kent. Even as her conniving stepmother pilfers the estate piece by piece, Bess is able to save her mother’s pearl-encrusted cross. She gives it to her friend Harry, sealed in the bottle with Bones’s real name. The bottle is carried back to America and into the hands of Mary Margaret Casey.

Twelve-year-old Mary Margaret loves the bottle’s mystery. And Lady Bess’s heirloom might even save Mary Margaret’s sister’s life. All the while Bones’s name is safe in the bottle until Mary Margaret figures out a way to set it free. Bones, Bess, and Mary Margaret are three young girls from very different worlds whose lives are connected by treasures concealed in a bottle and set adrift on the ocean.

I Am Coyote by Geri Vistein (October 2)

Coyote is three years old when she leaves her family in Algonquin Provincial Park in Ontario and embarks on a 500-mile odyssey eastward in search of a territory of her own and a mate to share it with. Journeying by night through the dead of winter, she endures extreme cold, hunger, and a harrowing crossing of the St. Lawrence River in Montreal before her cries of loneliness are finally answered in the wilds of Maine. The mate she finds must gnaw off a paw to escape a trap. The first coyotes in the northern U.S., they raise pups (losing several), experience summer plenty, winter hardship, playfulness, and unmistakable love and grief.

Blending science and imagination with magical results, this story tells how coyotes may have populated a land desperately in need of a keystone predator, and no one who reads it will doubt the value of their ecological role.

A Blind Guide to Stinkville by Beth Vrabel (October 6)

Before Stinkville, Alice didn’t think albinism—or the blindness that goes with it—was a big deal. Sure, she uses a magnifier to read books. And a cane keeps her from bruising her hips on tables. Putting on sunscreen and always wearing a hat are just part of life. But life has always been like this for Alice. Until Stinkville.

For the first time in her life, Alice feels different—like she’s at a disadvantage. Back in her old neighborhood in Seattle, everyone knew Alice, and Alice knew her way around. In Stinkville, Alice finds herself floundering—she can’t even get to the library on her own. But when her parents start looking into schools for the blind, Alice takes a stand. She’s going to show them—and herself—that blindness is just a part of who she is, not all that she can be. To prove it, Alice enters the Stinkville Success Stories essay contest. No one, not even her new friend Kerica, believes she can scout out her new town’s stories and write the essay by herself. The funny thing is, as Alice confronts her own blindness, everyone else seems to see her for the first time.

This is a stirring small-town story that explores many different issues—albinism, blindness, depression, dyslexia, growing old, and more—with a light touch and lots of heart. Beth Vrabel’s characters are complicated and messy, but they come together in a story about the strength of community and friendship.

A Sliver of Stardust by Marissa Burt (October 20)*

From Marissa Burt, author of Storybound, comes a richly imagined middle grade fantasy full of magic, intrigue, and imaginative twists. A Sliver of Stardust is the perfect next adventure for fans of A Wrinkle in Time and The Emerald Atlas.

Wren Matthews thought she'd outgrown nursery rhymes a long time ago. But that was before she knew that songs of twinkling little stars and four-and-twenty blackbirds were the key to an ancient, hidden magic.

Wren's discovery catapults her into a world of buried secrets, strange dreams, and a mountain fortress under an aurora-filled sky. But just as she starts to master her unique abilities, her new world begins to crumble around her . . . and only she can save it.

Nothing exciting happens on the Hill of Dust, in the remote mountains of Mexico in the 1950s. There's no electricity, no plumbing, no cars, just day after day of pasturing goats. And now, without his sister and mother, eleven-year-old Teo's life feels even more barren. And then one day, the mysterious young Esma, who calls herself the Gypsy Queen of Lightning, rolls into town like a fresh burst of color. Against all odds, her caravan's Mistress of Destiny predicts that Teo and Esma will be longtime friends. Suddenly, life brims with possibility. With the help of a rescued duck, a three-legged skunk, a blind goat, and other allies, Teo and Esma must overcome obstacles-even death-to fulfill their impossible destiny.

Inspired by true stories derived from rural Mexico, The Lightning Queen offers a glimpse of the encounter between two fascinating but marginalized cultures--the Rom and the Mixtec Indians--while telling the heart-warming story of an unlikely friendship that spans generations.

Class 507 is the worst class Ms. Bryce has ever taught. And she would know — she’s been teaching forever. They are so terrible that when a science experiment goes disastrously wrong (again), Ms. Bryce has had it and quits in the middle of the lesson. But through a mix-up, the school office never finds out.

The class figures if they don’t tell anyone, it’ll be one big holiday. Kyle and his friends can play games all day. Samantha decides she’ll read magazines and give everyone (much needed) fashion advice. Adam can doodle everywhere without getting in trouble. Eric will be able to write stories with no one bothering him. And Maggie ... well, as the smartest kid in the class she has an ambitious plan for this epic opportunity.

But can Class 507 keep the principal, the rest of the students, and their parents from finding out ... or will the greatest school year ever turn into the worst disaster in school history?

What new books are you looking forward to reading?