A Review of Fuzzy Mud + Back-to-School Reads! by Donna Galanti "Be careful. Your next step may be your last."

In Fuzzy Mud by Louis Sachar, fifth grader Tamaya Dhilwaddi and seventh grader Marshall Walsh have been walking to and from school since forever. But when a bully challenges Marshall to a fight, he avoids the conflict and takes a shortcut home through forbidden woods. Tamaya, a good girl who always follows the rules, reluctantly follows.

They soon get lost, and walk into big trouble with fuzzy mud that holds a dark secret. Even bigger trouble unravels in the days to come when the government gets involved. A scary new disease, an experiment gone wrong, an eccentric scientist. It all comes together to change their world. Can one little girl make a difference?


MY REVIEW:
I am a huge fan of Sachar’s Newbery Medal Winner Holes, so was eager to read this book and was lucky to get an advanced reader copy. This book has the flavor of a horror book for kids but without the full-on scary – meaning no nightmares.

This book is much shorter than Holes, and I would have liked to see the horror, mystery, and character development deepened for a more satisfying journey. There was so much more to expand on.

That being said, Sachar packs a lot of story in a short time. You'll fall for Tamaya, the quiet girl with the big heart. While fairly predictable, the story is more about the journey and the cast of characters each facing their own challenges.

Sachar does a good job of getting us up to speed with the science behind the "fuzzy mud" in short bursts that ratchets up the tension and leads us to wonder about the fate of the characters, although the eccentric scientist seems a bit cartoonish. Overall, an entertaining tale! I recommend for kids of all ages (even the grown-up kind).

Check out eight of my back-to-school recommendations for middle-schoolers to "fall" in love with reading - from classic to fantasy to contemporary (including one by a Mayhemmer here!).

#1 SURVIVING BEAR ISLAND (contemporary) by Paul Greci
This thrilling adventure begins after a sea kayaking trip takes a dangerous turn and Tom Parker is stranded on the remote, outer coast of the unpopulated Bear Island in the rough terrains of the Alaskan wilderness. He must put his skills to the test as he fights to reach safety through a wilderness full of bears and other dangers.

MY REVIEW
This book is a new classic I thought better than Hatchet! Surviving Bear Island is a story you won’t want to put down. I found myself thinking about it when I wasn’t reading it – I had to know what would happen next to Tom. Armed with only a small survival kit and his will to find his father, 12-year-old Tom must put his wilderness survival skills to the test if he wants to live. Each day brings new challenges to find food, make fire, and avoid death by starvation, injury, hypothermia – or bear. Tom may have only himself to count on in this harsh landscape, but he is not alone. His mother’s songs and father’s words of wisdom, come to him as he faces life and death each day. We watch him go from the reluctant hero of his own adventure tale to a young man, strong of heart and spirit. A beautifully written novel of love, loss, faith, and survival that will stay with you long after you’ve cherished the last word.

#2 WONDER (contemporary) by R.J Palacio
August (Auggie) Pullman was born with a facial deformity that prevented him from going to a mainstream school—until now. He’s about to start 5th grade at Beecher Prep, and if you’ve ever been the new kid then you know how hard that can be. The thing is Auggie’s just an ordinary kid, with an extraordinary face.

MY REVIEW
R.J. Palacio has created a character to love and admire in 10-year-old Auggie – along with his loyal friends. You will laugh and cry as Auggie navigates a new world that is often cruel and embracing. As the mother of a young boy, I so felt the pain of Auggie’s rejection and unfortunate disfigurement. I wondered how I, or my son, would react in such a situation. A great topic for discussion between me and my son. This book is a “wonder” and so is Auggie.

#3 HOLES (contemporary) by Louis Sachar
Stanley has been unjustly sent to a boys’ detention center, Camp Green Lake, where the boys build character by spending every day digging holes exactly five feet wide and five feet deep. The boys are digging holes because the warden is looking for something. But what could be buried under a dried-up lake?

MY REVIEW
This is a gem of a book I wish I’d read sooner. My son brought it home and sucked it down in one sitting. It’s super fun how the author, Louis Sachar, masterfully intertwined the story from the past with the current tale and tied it up perfectly at the end. It held hope and joy in the most barren and dark conditions where the faces of evil shone bright. Stanley and his friend Zero are unlikely heroes that tell a tale of true friendship. 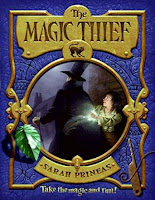 #4 THE MAGIC THIEF (fantasy) by Sarah Prineas
In a city that runs on a dwindling supply of magic, a young boy is drawn into a life of wizardry and adventure.

MY REVIEW
The Magic Thief is a flash-bash of a magic tale with a humble boy, Conn, who simply knows he is destined to be a Wizard – and maybe the only one to save his town from its un-magic demise. Conn’s determined voice shines through with flinty-glinty fun and grit as he navigates his new role as an unlikely apprentice to Nevery (a stern, serious wizard with a hidden good heart). Add some unusual sidekicks (like a bruiser of a body guard who loves to knit, make biscuits and pie), dark villains and creepy, twilight places and you’ve got a mish-mash mosh of adventure with just enough intrigue and wonder – and of course, magic. Looking forward to Conn’s next adventure!

#5 SPARROW ROAD (contemporary) by Sheila O’Connor
It’s the summer before seventh grade, and twelve-year-old Raine O'Rourke’s mother suddenly takes a job that’s hours from home at mysterious Sparrow Road - a creepy, dilapidated mansion that houses an eccentric group of artists and an unexpected secret from Raine’s own life that changes her forever.

MY REVIEW
I wish I could give this book a “blizzard of stars”. This is the book that made me fall in love with reading middle grade again. Raine has an unexpected summer that at first she resists, but as she transforms, and the people she meets transforms, it changes her life forever. O'Connor creates a colorful scene and set of many characters with sparse, poetic prose. We see and feel all the characters through Raine’s eyes and heart. I flipped back to pages to re-read the scenes that painted my heart with wonder and feeling. It’s a book about searching for something you don’t know. It’s about love, hope, redemption, getting left behind – and doing the leaving yourself when ready.

#6 THE ONE AND ONLY IVAN (magical realism) by Katherine Applegate
Ivan is an easygoing gorilla. Living at the Exit 8 Big Top Mall and Video Arcade, he has grown accustomed to humans watching him through the glass walls of his domain. He rarely misses his life in the jungle. Then he meets Ruby, a baby elephant taken from her family, and she makes Ivan see their home through new eyes.

MY REVIEW
Katherine Applegate blends humor and poignancy to create Ivan’s unforgettable first-person narration in a story of friendship, art, and hope. This story of Ivan the gorilla broke my heart – and then mended it again…over and over. This tale is a testament to the transformative power of friendship and love, and reveals that nothing is impossible if you want it badly enough. We see more deeply the strengths, and weaknesses, in our own humanity from one gorilla than from a cast of humans. And we can celebrate the hope in all of us that remains even in our darkest hour and in a place where the dimmest of lights can power the brightest of change. This simply written yet powerfully poetic story will stay in your heart forever – and so will its hero, Ivan.

#7 THE FALSE PRINCE (fantasy) by Jennifer A. Nielsen
In a discontent kingdom, civil war is brewing. To unify the divided people, Conner, a nobleman of the court, devises a cunning plan to find an impersonator of the king’s long-lost son and install him as a puppet prince.

MY REVIEW
Couldn’t put this one down! I’m a sucker for a medieval setting of kings and commoners, paupers and princes, castles and dungeons, and championing the underdog. You’ll want to follow the adventures of Sage from orphan to would-be prince laced with intrigue. Nielsen drops clues along the way making you wonder just who this orphan Sage is, and it’s just enough to pack a powerful punch at the end when it all wraps up. And when you think you know what’s going on actually comes true, you’ll be cheering on the good guys and giving the bad guy a good kick along with his most welcome comeuppance. Can’t wait to read the next book in this trilogy.

#8 MY SIDE OF THE MOUNTAIN (classic) by Jean Craighead George
Terribly unhappy in his family’s crowded New York City apartment, Sam Gribley runs away to the solitude and danger of the Catskill mountains, where he finds a side of himself he never knew.

MY REVIEW
This book was written in 1959 but there are still lessons to be learned today of achieving independence, making your dream a reality, finding your own way, and solving problems. Most of all, it shines a light on how we can still appreciate the grand beauty of nature all around us and live in harmony with it. Follow a year with Sam as he makes a home in the old woods of his grandfather and teaches himself to live off nature’s resources, make friends in the wild…and most importantly learn to love his own company. I didn’t want his adventure to end. I like to think of Sam still there living in his tree home as I come whistling up the glen to visit him for a dinner of fresh caught fish and acorn pancakes with homemade jam.

What are some of your favorite back-to-school reads?