One of the challenging aspects of writing MG adventure fiction is killing off the bad guy without having your MG characters actually do the deed. It’s frowned upon for kids to kill people, and rightly so. But what do you do when the villain needs to be offed?

Here are a few ways to tackle the problem:

Not Quite Dead
Percy Jackson uses his pen-turned-into-a-sword to slice his way through adversaries who explode into dust and re-form back in the Underworld. You can’t kill an immortal, after all. Very clever, Rick Riordan! There are a few other ways to put your bad guy into an incapacitated but not-dead state. How about suspended animation? Disabling poison? Turn them into a toad? Carbonite, anyone?

It Was an Accident
You can knock off your villain in a chain of events that is started by your MG character(s) without any intent to kill, but results in the bad guy’s demise by pure chance. You could also call this the Rube Goldberg Method. 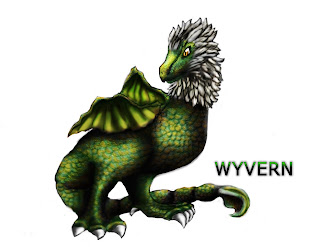 Let the Adults Do It
The MG heroes in Brandon Mull’s fantasy adventures usually travel in a group with lots of adults who deliver the fatal blows while the kids fight bravely by their side.

Bring in a Wyvern!
Yes, I really did that. But seriously, make use of a monster, a gaping crevasse in the earth, a crashing space ship, or some other uncontrollable force that is already part of your climactic scene to take out your bad guy.

Hoist by His Own Petard
One of the most satisfying methods of dispatching the antagonist is to have his death be the result of his own greed and villainy.

Actions have consequences, bad dude. You had it coming.
Posted by Dianne K. Salerni at 11/23/2015