To Believe or Not to Believe: A Guest Post by Krystalyn Drown 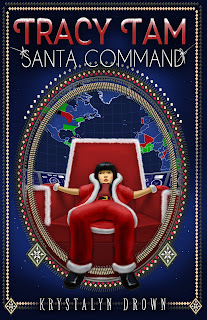 TRACY TAM: SANTA COMMAND is about a ten-year old’s search for the truth about Santa, but tackling the legend of Santa Claus can be tough when writing for middle grade readers. Among those eight to twelve-year-olds, there are a wide variety of beliefs and experiences. Some look to the skies every December 24th to see if they can spot a flying sleigh while others, for whom the magic has faded, only look for stars. How could I write about Santa without ruining the magic for some and eliciting eye rolls from the others? The answer was to take on the idea of magic itself.

From the very first draft, Tracy never doubts the existence of Santa. She knows that he is real, but she doesn’t believe he has magic. Her scientific brain doesn’t have room for flying reindeer or sliding down chimneys. She believes in jet engines and DNA samples. Her goal is never to disprove Santa. Instead, she wants to create a science project showing that he uses science instead of magic to make his deliveries.

With Tracy’s goal in place, the question then became, “Why would a smart, savvy ten-year-old believe in Santa in the first place?” To answer that, I had to set the novel in a slightly different world than ours. In Tracy’s world, Santa Claus absolutely 100% exists. Throughout the novel, there are little clues that show this.

Santa has his very own advertising agency, the Santa Commission.

It wasn’t until (Tracy) saw a magazine ad from the Santa Commission that she had her project. It reminded kids to have their lists in no later than November 20th so Santa’s elves had time to organize.

Adults in Tracy’s world also believe in Santa. In this excerpt, Tracy’s parents hear a noise in the hallway.

“It’s probably Santa.” It was her father’s voice this time. “He usually comes about now.”

“Yeah,” her mother said. “I bet you’re right. I hope he brings her that microscope Tracy’s been asking for. I couldn’t find it online.”

Once the belief system had been established, I wanted to toy with it a little bit. What if Tracy was right? What if Santa does have help from science? What if Santa isn’t who everyone thinks he is? When Tracy arrives at Santa Command, she finds computers, holograms, and … a magical portal to the North Pole?

Yes, even in a world ruled by science, there is still room for the magic of Santa Claus. And this is where Tracy’s world is much like ours. Santa doesn’t exist to deliver presents. That is just one of the benefits. Santa, and his legacy, are there to inspire kindness, hope, and the joy of giving to others. You don’t need to see a flying sleigh to believe in that type of magic.

To Tracy, magic means disappearing from one place and reappearing in another. She soon learns that magic has many other definitions. What does magic mean to you and where have you seen it in our world?

Email ThisBlogThis!Share to TwitterShare to FacebookShare to Pinterest
Labels: Theme