I’m on my way to the 21st-Century Children's Nonfiction Conference, so for today's post I wanted to share some middle grade adventure stories from authors I know. The first is someone I went to high school with in Juneau, Alaska. We reconnected on Facebook. The second is a critique client. I invited them to describe their stories and offer a bit of advice. If you like adventure stories, or know young people who do, check out their books! 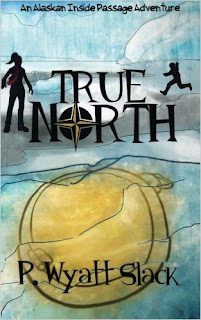 A shipwreck... A mystery... And the search for hidden treasure. Twelve-year-old Shelby is looking for adventure. When the shiny object she finds frozen in a chunk of glacier ice hints at hidden treasure, she and her brother Cole rush to follow the clue. But they are not the only ones on the trail. Fighting the real dangers of Alaska's wilderness, they race to find the treasure before the man in the brown rubber boots gets it (or them).

True North is the first in what will be a series of adventures for Shelby and Cole as they spend their summer in various towns of Southeast Alaska. Each port of call comes with new excitement, mystery, and a taste of the history of this fascinating and wild land.

The Alaskan Inside Passage Adventure series is for middle grade readers (grades 3-6) who want to go on adventures (vicariously) with kids like them. I was lucky enough to grow up in Alaska where dangers are real and adventure is around every corner. Abandoned gold mines, a glacier you can climb on, stormy seas, and wild animals (all places I got to explore during grade school) offer Shelby and Cole endless ways to find adventure, danger, and fun!

Words of Advice or Inspiration:

Give your characters a spirit of adventure. No one wants to hang out with sullen kids in real life, so why would they hang out with them in books? Give those characters a zest for life. And if their tendency to seek excitement leads them into trouble, so much the better! 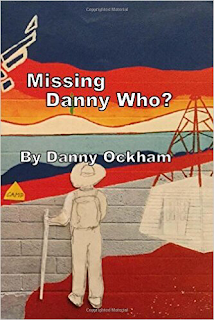 Missing Danny Who?: Stories of a Runaway
by Danny Ockham as told to Zandy Clark

Danny Ockham should be called Danny I. Dunno, because he does not know much about his past, or his future. Living in the present, he survives his wildman father one day at a time. When his mother deserts them, Danny runs away to the desert alone. Now, every act is a plan to get food.  Now, foraging  and fishing are real, when before they were his mother's hobby.

Danny changes his name as often as his underwear to escape foster care and the blame for a wildfire. "No more stupid dreaming to be someone else," he thinks. "Now I am a new person." Danny stays one step ahead of trouble, like a modern-day Huckleberry Finn. Does odd jobs for people he befriends in his trek up Arizona rivers to the high country. When he finally seems to have found a home, his mother reappears. Will he choose her reservation life, or the one he has made for himself?

His troubles double when he tries to help his Iraqi friend escape from her abusive adopted father. Danny grows up fast while learning about confusing laws intended to help abuse victims. He wants to help, but does he have a right to interfere, if she won't go willingly?

Part wilderness adventure, part coming-of-age story, Danny's tale will appeal to anyone who has ever wondered what would happen if they simply ran away from it all.

What I learned by self publishing my first novel:

I am a loner, like my hero, Danny, so at 75 years of age, naturally I didn't wait for publisher's rejections of my first novel, but rather set out to publish it myself. I avoided all the expensive self publishers, thank God, and was guided by friends to CreateSpace.com, an Amazon affiliate.

What I learned was how to collaborate. No, I did not use CreateSpace editing service, formatting service or cover design service, but I did take chances by contacting people through networking who might mesh with my subject, an abused runaway in Arizona.

I met Velma Moss, Ph.D. In education, who had written and self published several books. She liked Danny's story and wanted to help make it available to teachers as well as kids. Since my only computer is an iPad, she offered to format the book on her ancient Dell so it would not turn into spaghetti due to the scrambling that inevitably happens when Apple software meets Createspace's Microsoft.  Even so, justifying the copy flush left and right created what I call "squiggles", which are hanging
Lines such as you see here, but not too hard
to fix!

Then, I stumbled on Chris Eboch and took a chance asking her to help edit my book, because her books are southwestern and sometimes Middle Grade, like mine. Think about it for a minute! She could be blunt about some inappropriate subject matter that would kill it for all publishers as well as most teachers and parents. Somehow, I knew she was the right person to fix Danny's rambling narrative. Perhaps it still is rambling (you tell me!), but it flows much more smoothly than before, by all accounts. That's partly because my pet babies, my rants, have been eliminated. Createspace editors, who cost the same, would not have been so direct as Chris.

Danny's cover happened by chance. I saw a news story about a mural painted by a hundred or more abused foster children, guided by Oliverio Balcells. What could be more...ummm, symbolically synergistic? Baloney, it works because it is a surrealistic desert landscape highly colorful and simple. I drew Danny and stuck him in the foreground with scotch tape.  (Yes, I am Scottish).

Getting permission took time. A lawyer had to chime in, but I waited for that. Normally, I would not, but my norms have changed since I wrote Danny.

So, I have learned to collaborate with like-minded people and wait and rewrite for two years or more, a first in my runaway life.

Thanks for joining us, P. Wyatt Slack and Zandy Clark!

What are your favorite recent adventure novels for young people?

Chris Eboch's novels for ages nine and up include The Genie’s Gift, a middle eastern fantasy; The Eyes of Pharaoh, a mystery in ancient Egypt; The Well of Sacrifice, a Mayan adventure; Bandits Peak, a survival story, and the Haunted series, which starts with The Ghost on the Stairs. Her writing craft books include You Can Write for Children: How to Write Great Stories, Articles, and Books for Kids and Teenagers and Advanced Plotting. Learn more at www.chriseboch.com or her Amazon page or sign up for her newsletter.
Posted by Kris Bock at 6/09/2016