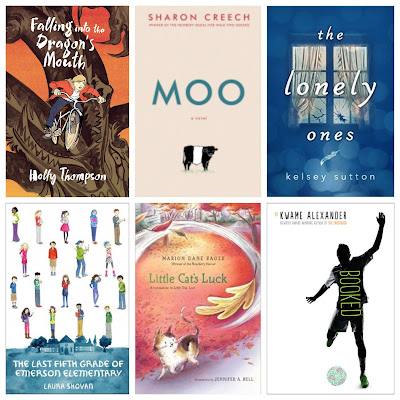 Last year my Project Mayhem posts were about new books I was excited to read, which I arranged according to release date. This year I'll be sharing new releases by genre, starting with the verse novel.

Technically, verse is not a genre but a form. In its simplest definition, a verse novel is a story told through poetry. Some purists like to argue that verse novels aren't true poetry but some sort of hybrid between poetry and prose -- a "lesser" form called verse. As a verse novelist myself, this used to get my angsty juices flowing: Was I a poet? Was I a novelist? Was I something in between?

It no longer matters to me how others define the verse novel. What's most important is finding the best, most honest and effective way to tell a particular story.

While there are as many styles as there are verse novels, these books share some things in common:


Some verse novelists, such as Laura Shovan (see below!), use specific forms of poetry to tell their stories. Others rely on free verse alone. As an author who writes both verse and prose, one striking difference is how I experience the writing itself: Prose feels to me like a movie. Verse feels like a collection of related photographs grouped together in an album. Both tell stories, but in different ways.

Here are new middle-grade verse novels for 2016. Some are straight verse, some are a mix of poetry and prose. I hope you enjoy!

When an indoor calico cat named Patches spots a golden autumn leaf fluttering past her window, she can’t help but venture outside to chase it. But soon, Patches feels something tugging at her, telling her to find a special place—one she won’t know until she sees it. Why must she go on this search? She doesn’t know yet.

Along the way, Patches finds herself in dire circumstances, but with the help of the other neighborhood animals, she faces off against the scariest dog in town and continues on her journey to her special place.

Beautifully told in verse and accompanied by adorable illustrations by Jennifer A. Bell, this heartwarming novel from Newberry Honor­–winner, Marion Dane Bauer, is a timeless, touching, and fulfilling story about finding your way home.

In this follow-up to the Newbery-winning novel THE CROSSOVER,  soccer, family, love, and friendship, take center stage as twelve-year-old Nick learns the power of words as he wrestles with problems at home, stands up to a bully, and tries to impress the girl of his dreams. Helping him along are his best friend and sometimes teammate Coby, and The Mac, a rapping librarian who gives Nick inspiring books to read.
This electric and heartfelt novel-in-verse by poet Kwame Alexander bends and breaks as it captures all the thrills and setbacks, action and emotion of a World Cup match!

In a Japanese seaside neighborhood lives Jason Parker:
a sixth grader
one year older than his classmates
a stinking foreigner to some classmates
an orange belt in aikido
a big brother
Jason Parker is just a boy trying to get through his days with calm and courage. If only everyone around him would let him.

This is a beautifully spare novel in verse about one boy's life-a story that will resonate with anyone who has ever struggled to fit in.

The Lonely Ones — Kelsey Sutton (April 26)

When your only friend is your own endless imagination, how do you escape your mind and connect to the world around you?
With parents too busy to pay her attention, an older brother and sister who would rather spend their time with friends, and peers who oscillate between picking on her and simply ignoring her, it's no wonder that Fain spends most of her time in a world of her own making. During the day, Fain takes solace in crafting her own fantastical adventures in writing, but in the darkness of night, these adventures come to life as Fain lives and breathes alongside a legion of imaginary creatures. Whether floating through space or under the sea, climbing mountains or traipsing through forests, Fain becomes queen beyond--and in spite of--the walls of her bedroom.

In time, Fain begins to see possibilities and friendships emerge in her day-to-day reality . . . yet when she is let down by the one relationship she thought she could trust, Fain must decide: remain queen of the imaginary creatures, or risk the pain that comes with opening herself up to the fragile connections that exist only in the real world? Told in breathless and visual verse, THE LONELY ONES takes readers through the intricate inner workings of a girl who struggles to navigate isolation and finds friendship where she least expects it.

Laura Shovan’s engaging, big-hearted debut is a time capsule of one class’s poems during a transformative school year. Families change and new friendships form as these terrific kids grow up and move on in this whimsical novel-in-verse about finding your voice and making sure others hear it.
Eighteen kids,
one year of poems,
one school set to close.
Two yellow bulldozers
crouched outside,
ready to eat the building
in one greedy gulp.
But look out, bulldozers.
Ms. Hill’s fifth-grade class
has plans for you.
They’re going to speak up
and work together
to save their school.

When Reena, her little brother, Luke, and their parents first move to Maine, Reena doesn’t know what to expect. She’s ready for beaches, blueberries, and all the lobster she can eat. Instead, her parents “volunteer” Reena and Luke to work for an eccentric neighbor named Mrs. Falala, who has a pig named Paulie, a cat named China, a snake named Edna—and that stubborn cow, Zora.
This heartwarming story, told in a blend of poetry and prose, reveals the bonds that emerge when we let others into our lives.

What verse novels are you looking forward to this year?
Posted by Caroline Starr Rose at 6/13/2016