Reading and Writing Should Be Dangerous, and other things Stephen King said

Few things compare to the feeling of meeting a person we admire, and last Friday I had the chance to attend an event in Stephen King’s END OF WATCH national tour. I purchased tickets months in advance, and when I arrived to the venue hours before the event, the line already snaked around the building. That day temperatures hit the 90s for the first time of the summer, but I was undeterred. Melting under the scorching sun, I spoke with friends and strangers about when we’d discovered King’s books. His books hardly qualify as middle grade or young adult (with the exception of CARRIE, which in my opinion is fully YA), but the vast majority of us, his fans, confessed to finding his words in our tween and early teen years,


Growing up, I never chose books according to grade-reading level. I read whatever was available. The newspaper. Nutritional information behind the saltbox. I read even graffiti-ed poems on the front of the building where I lived.
A novel was a special kind of treasure, but I knew even at a young age what I was ready to read then, and what could wait.
Sometime in tenth grade, I read my first Stephen King: DIFFERENT SEASONS, a collection of novellas among which is Rita Hayworth and The Shawshank Redemption. I read it in Spanish, and although I know so many things are lost in translation, King’s trademark voice and mood stayed with me forever. When I read it again in college (this time in English), once again I fell into the reading trance I crave and that I look for in every book I read.
Friday night in Salt Lake, King said that the Stephen in front of the audience wasn’t the one readers probably expected to find. Scary Stephen/Writer Stephen stays at home, waiting for Popular Stephen/Book-touring Stephen to return to the page for a new work-in-progress. He claims he hardly knows what goes on in Scary/Writer Stephen’s mind when creating a story, but that he knows that Writer Stephen has two things in mind when creating his worlds: verisimilitude and a character the reader will care about and follow to the end of the story. 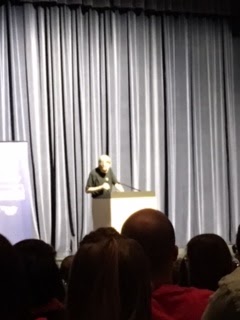 An author achieves verisimilitude when the story contains vivid, specific details that bring the world to life. A successful character needs to want something and yearn to achieve it, and the reader should identify with the wanting so much, she will not put the book down until she knows how the story ends. The reader should see a part of herself in the story.
Maybe that’s why when I was younger I intuitively knew what things I was ready to read then, and what I should leave for later in life. That’s why even now sometimes I don’t connect with the character of a highly acclaimed book, but a few months from now, or even years, that book becomes one of my favorite ones ever (hello, Melina Marchetta’s JELLICOE ROAD). For every book, there's a time and a season, don't you think?
I’m currently in my final year of a MFA program at the Vermont College of FineArts, and I’ve been writing for a long time, so the advice to both write believable worlds and creating characters with a strong desire line was familiar to me. But the statement that struck me the most was when King said that reading should always be dangerous.
I’ve been pondering on those words this weekend.
Reading, everything and anything, changes me in some way, even if small, and that’s what makes it magical. It doesn’t mean that I, or any of us for that matter, should only read literary horror or edgy books. It means that we should be aware that everything we read leaves a mark upon us. Stephen King doesn’t throw those words—“reading should be dangerous”—in vain. Besides being a super-prolific writer, he’s a voracious reader, and has reviewed HARRY POTTER, TWILIGHT, and even FIFTY SHADES OF GRAY. As with writing, he knows what he’s talking about when he talks about reading.
We read dangerously when we read outside of our comfort zone, about experiences vastly different from ours, in formats that we haven’t tried before.
For children, who are experiencing the world for the first time, reading is always a dangerous endeavor, so dangerous that sometimes well-meaning adults prevent them from reading books that are sorely needed, like Kate Messner’s THE SEVENTH WISH, Walter Dean Myer’s MONSTER, Sherman Alexie’s THE ABSOLUTELY TRUE DIARY OF A PART-TIME INDIAN, or Judy Blume’s ARE YOU THERE GOD? IT’S ME, MARGARET.
King’s words inspire me to write dangerously too, to try formats and genres that I haven’t tried before, experiences and situations that make me curious, excited, or even afraid.
This summer, I pledge to read and write dangerously:
I’m stretching myself to read more non-fiction and graphic novels. I’ll even dive into some “adult” books (gasp!).
I’m double-dog daring myself to write the draft of that picture book I’ve been fantasizing with for months.
I’m challenging myself to write more poetry, even if it’s amateurish and still such a mystery to me.
I’m bribing myself with chocolate and a binge-watch-worthy show on Netflix if I finish revising the middle grade that’s been very hard emotionally for me and send it to my agent once and for all.

Tell me friend, how will you read and write more dangerously this summer?