New Middle Grade Books on The Titanic - Why the Fascination with Disaster? 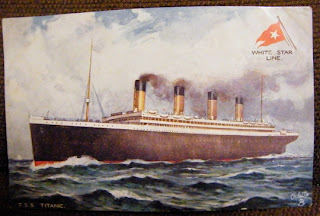 The 100th anniversary of the Titanic disaster is coming up this April, and there are several new books out for middle grade readers about it, both fiction and nonfiction. When I decided to write this post focusing on these books, I started to wonder why it has held such a fascination for so many people, including kids who have never even seen the Leonardo DeCaprio movie. For those who aren’t fascinated by it, it can seem like a morbid topic, and hard to understand why some want to read about it. I asked several writer friends for their opinions and got some great answers:

The protracted nature of the disaster – It gave a chance for people to react, testing the limits of their bravery. If it had all been over suddenly, like in an explosion, there would have been no human element.
The unusual element added by the iceberg - The unsinkable ship sank from a cause that fits into the category of stranger than fiction.
The lure of imagining yourself on the ship – In so much fiction, the exciting part is trying to figure out how you would react in such a situation, in a sense testing out the limits of your own bravery and ingenuity.
These are only a few possibilities. I was surprised by how many people remember liking disaster stories as children, and clearly they are still popular today
Here are a few of the new books just out or coming out.
Fiction

DANGEROUS WATERS: AN ADVENTURE ON THE TITANIC by Gregory Mone
This is the story of a twelve-year-old who sneaks aboard the Titanic, a passenger who is rare book collector and a thief who is out to steal a rare book, all in the midst of the disaster. The rare book collector in the story, Harry Widener, was an actual passenger on the fatal voyage, so I thought that was a fascinating premise on which to build a story. The addition of a mystery involving Sir Francis Bacon, alchemy and a girl who can pick locks adds to the fun.

KASPAR THE TITANIC CAT by Micheal Morpurgo
There were pets aboard the Titanic, and this is about a fictional one, a cat, who through a convoluted set of circumstances ends up on board along with a fourteen-year-old stowaway and a young heiress.  About half of the story takes place before they board the ship, and it gives a nice feel for the time period. This was first published in Great Britain in 2008 with the title Kaspar Prince of Cats, but was only released in the U.S. this year. The illustrations are useful to get a sense of the time period.

CAN YOU SURVIVE THE TITANIC? An Interactive Survival Adventure by Allison Lassieur
Similar to the old Choose Your Own Adventure Stories, in this book you can choose to be a surgeon’s assistant, a governess in charge of three children, or a twelve-year-old boy traveling with his father. This is very easy to read with some nice illustrations. My daughter enjoyed it very much. 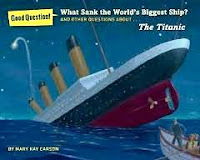 WHAT SANK THE WORLD'S BIGGEST SHIP? AND OTHER QUESTIONS ABOUT THE TITANIC by Mary Kay Carson

This book doesn’t come out until April 3rd, but it looks like a good choice for the middle graders who want the facts, those nonfiction readers who devour books with good details. It got a great Kirkus review: “The format is irresistible, each answer just long enough to provide essential information...overall this will be a sure hit with young readers.” Since I didn’t get a chance to read this before the post, I emailed the author and asked her to give us one fact she learned in her research that really surprised her. Here’s her answer: “I'd say it was that the hull wasn't so much ripped open by the iceberg, as it was unzipped. Poor quality, cheap bolts were used to attach the sheets of metal along the hull. When the iceberg scraped alongside the hull, the iceberg sheared off the bolt heads and the sheets of metal came apart. This was discovered by analyzing the metal of bolts retrieved from the wreck site."
So were any of you fascinated by the Titanic or do you know kids now who are? I’d love to hear your thoughts on why it has gripped the imaginations of so many.
~Dee Garretson