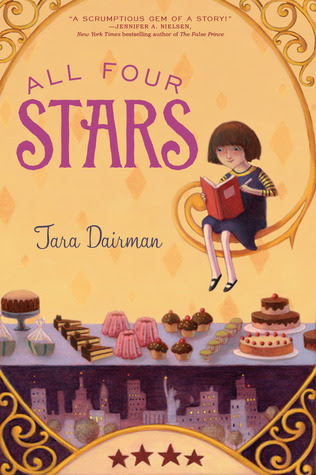 Now it's my turn, with Tara Dairman's debut ALL FOUR STARS, coming from Putnam on July 10th. I have loved this story ever since I saw the first 250 words in Authoress Anon's Baker's Dozen Auction in 2011. It was no surprise to me that it was snapped up by agent Ammi-Joan Paquette, and then a publishing deal was forthcoming in short order.

What It's About (from Goodreads): Meet Gladys Gatsby: New York’s toughest restaurant critic. (Just don’t tell anyone that she’s in sixth grade.)

Gladys Gatsby has been cooking gourmet dishes since the age of seven, only her fast-food-loving parents have no idea! Now she’s eleven, and after a crème brûlée accident (just a small fire), Gladys is cut off from the kitchen (and her allowance). She’s devastated but soon finds just the right opportunity to pay her parents back when she’s mistakenly contacted to write a restaurant review for one of the largest newspapers in the world.

But in order to meet her deadline and keep her dream job, Gladys must cook her way into the heart of her sixth-grade archenemy and sneak into New York City—all while keeping her identity a secret! Easy as pie, right?

My Take:
This is classic middle grade, full of heart and humor. Gladys' parents are disasters in the kitchen--yet Gladys has gourmet tastes. The opening scene is indelible, with Gladys setting fire to the kitchen curtains with her father's blowtorch as she tries to put the finishing touches to the aforementioned crème brûlée.

The pace is unflagging as Gladys's school essay on "My Future" gets picked up by the food editor of The New York Standard. But the editor doesn't know Gladys is 11. It's up to Gladys to come up with some innovative ideas on how to sneak into New York City, review a top restaurant, and write her newspaper copy. Can you say "sticky situations?" They abound. My favorite one finds Gladys under a restaurant table... but if you want to know why she's in this situation, you'll have to read the book!

MY VERDICT: ALL FOUR STARS is worth 5 stars

Tara is also a great supporter of other writers, and is active on social media. She kindly answered a few questions for me and for the Mayhem readers:

1) Who are your favorite (middle grade) writers?

As a child, Roald Dahl was unquestionably my author of choice, with Matilda, The Witches, and The BFG topping my favorites list. (There's a BFG reference in ALL FOUR STARS, actually—see if you can catch it!) Then, of course, I grew up and had to read more serious stuff for a while. But in my early 20's, a little series called Harry Potter started blowing up, and I fell in love with middle grade all over again. I followed the Harry books with a Series of Unfortunate Events, which I also adored, so I credit J.K. Rowling and Lemony Snicket with bringing me back to kidlit, and inspiring me to try my hand at writing some myself.

2) What's on your nightstand now?

Well, I've got a travel guide for Bhutan...I really want to go to Bhutan. :) But I've also got an ARC of Be a Changemaker by Laurie Ann Thompson, Robert Lettrick's debut MG novel Frenzy, and Adi Rule's gorgeous YA debut Strange Sweet Song. (I already read that last one as an ARC, but I'm dying to read it again!)

3) Pick a favorite scene from your novel, and say why you like it.

Ooh, tough question. Well, there is a sequence that takes place at a terrible Broadway musical. In addition to it being a scene of high tension for Gladys thanks to her impending restaurant-review deadline, it was just an awful lot of fun for me to make up scenes and lyrics and costumes for a bad musical. (Also, my sister rooke is a musical theater actress, and I was able to squeeze a tiny cameo for her into that sequence. Gladys runs into a group of actors in the alleyway behind the theater while she's trying to make her escape, and an actress named Brooke gets a few lines.)

...saying the phrase “I speak a little Mandarin” in Mandarin. I learned that phrase, along with some other travel-related ones, off a CD before I traveled in China. Apparently, I learned it a little too well, because people who heard it would then try to have long conversations with me in Mandarin, much to my befuddlement. Sadly, the CD refused to teach me how to say “I do not speak Mandarin”!

5) My favorite breakfast is...

Fruit-topped Belgian waffles, bacon, and home fries, with a glass of milk and maybe some fresh-squeezed orange or grapefruit juice on the side. Immediately followed by a nap.

6) If you could visit any place, where would it be? [In your case, this would probably read "revisit," since you are such an accomplished traveler!]

I already mentioned Bhutan, right? I got a glimpse of the Himalayas from western China, and have been itching to go back ever since.

Tara Dairman is the author of the middle-grade novel ALL FOUR STARS, which will be published by Putnam/Penguin in 2014. She is also a playwright and a recovering round-the-world honeymooner (2 years, 74 countries!).

Tara holds a B.A. in Creative Writing from Dartmouth College and is represented by Ammi-Joan Paquette of the Erin Murphy Literary Agency. You can find her online in the following places: